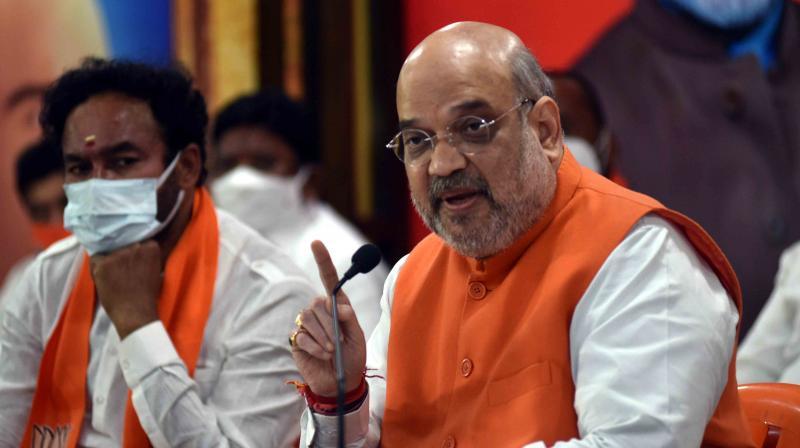 Hyderabad: Union home minister Amit Shah said here on Sunday that farmer protests against the new farm bills were apolitical. He defended the bills saying they were for welfare of farmers.

Speaking to reporters here, he said, “The new farm laws are meant for welfare of farmers. After a long time, farmers are going to come out of a locked system.”

Shah has already appealed to protesting farmers to shift to Burari ground in Delhi to stage their protests, saying the Centre was ready to hold discussions with them as soon as they move to the designated place.

Welcoming political rivals taking up the farmer’s cause as a protest, Amit Shah said, “whoever wants to oppose it politically, let them do it. I have never said the farmers’ protest is political. But if K. Chandrashekar Rao wants to politically protest against it, he is welcome.”

Replying to another question, Shah criticised AIMIM chief and Hyderabad MP Asaduddin Owaisi over his reported remarks on what action had the Modi government taken over charges that Pakistanis, Rohingya and Bangladeshis were illegally staying in Hyderabad.

Shah demanded that Owaisi give in writing, seeking removal of those staying illegally to initiate Central government’s action against them.

“When I take action they (Owaisi and others) create ruckus in Parliament. Have you not seen it?” he asked. “Let them just once give me in writing to expel Rohingya and Bangladeshis… then I will initiate action. It should not just be a speech for elections.”

When there is discussion over the matter in the Parliament, who takes their side? the people of the country know it,” Shah added.

Shah dismissed the challenge of Chief Minister KCR to create a federal front, saying, “he tried last time and lost half the Lok Sabha seats in his state. Let him try again… we will see how much more he loses.”