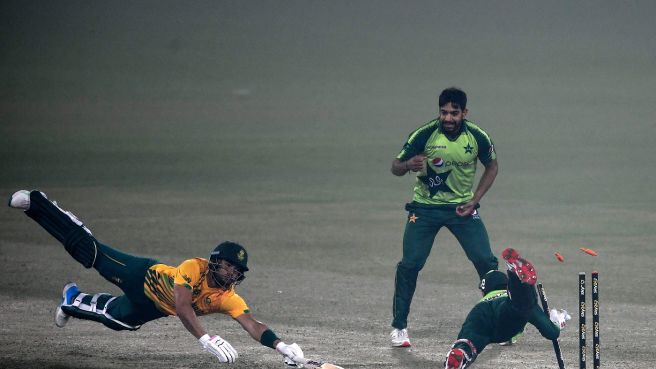 Pakistan inning was jolted by 3 quick strikes by Tabrej Shamsi but in the end Pakistan achieved the winning target in 20th and won by 4 wickets.

Earlier David Miller brought in some fight on the table with his brilliant 85 (45) studded with 7 sixes for South Africa. Proteas innings was in complete disarray at one point of time as they were less than 50 with 6 wickets down.

Pakistan won the toss and opted to field. Pakistan made three changes. IN – Asif Ali, Hasan Ali and Zahid Mahmood (international debut). OUT – Iftikhar Ahmed, Khushdil Shah and Haris Rauf. They have two leg-spinners in the XI.

For South Africa, Bjorn Fortuin comes in for Glenton Stuurman. So, both teams are expecting spin to play a big role…

They laid the groundwork for victory after choosing to field for the second successive match and restricting Pakistan to a below-par total, thanks to an outstanding performance by Dwaine Pretorius. He claimed the best figures for South Africa in T20I cricket with 5 for 17, beating Ryan McLaren’s 5 for 19.

Pretorius took a wicket at the start and returned to take four in the last quarter of the innings to keep the hosts to a chaseable total. Reeza Hendricks and Pite van Biljon’s 77-run third-wicket stand set South Africa up for victory, and David Miller sealed it with 22 balls to spare.