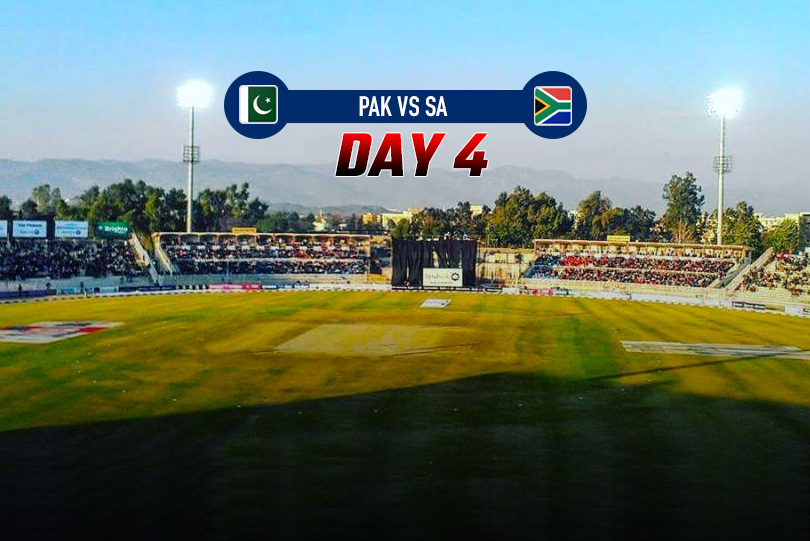 PAK vs SA 2nd Test Day 4 Stumps: Markram’s fifty keeps SA’s chase in control; need more 243 runs to win- South Africa put themselves in a position to pull off the best effort by a visiting team in Pakistan. Set 370 to win the Rawalpindi Test, South Africa finished the day 242 runs behind, with nine wickets in hand and set batsmen at the crease.

Aiden Markram and Rassie van der Dussen’s second-wicket partnership is worth 92 and demonstrated the kind of application South Africa’s line-up have lacked for large parts of the series so far. Although the surface has become easier to bat on, with little sign of the turn that was noticeable on the first day, and no reverse swing yet, both batsmen made noticeable adjustments to their technique. Markram’s improved footwork against spinners saw him record his second half-century of the tour while van der Dussen countered the low bounce with a substantial stride forward stride and by playing the ball close to the body as often as possible. He is two short of his own second fifty of the series.

The pair came together after Dean Elgar, whose first 16 runs came from four boundaries, got carried away by his aggressive approach and chased a wide Shaheen Shah Afridi delivery only to edge to Mohammad Rizwan. Television cameras caught Elgar flinging his bat in frustration once he had reached the dressing room.

At that stage, Markram had only just found his rhythm after seeing off 22 dot balls, 18 from Afridi, before taking on the spin. In one over, Markram took 14 runs off Nauman Ali and survived a review for lbw after UltraEdge showed he had inside-edged the ball onto his front pad. Markram continued to play Nauman and later Yasir Shah with confidence but also pounced on loose spells from Hasan Ali, who struggled to find the right length. Markram’s fifty came off 71 balls, at better than a run-a-ball after his initial scoreless vigil.

Van der Dussen had a little more trouble against Nauman and was twice beaten by flighted deliveries outside off but quickly adjusted to playing the ball as close to the body as possible. He punished Faheem Ashraf for poor lines, leaving Babar Azam with no option but to go back to Afridi and the spinners, neither of whom were able to make a breakthrough.

Pakistan may still feel they have enough, both because the highest successful chase in the country is Sri Lanka’s 220 at the same venue 21 years ago and because South Africa have not successfully chased a total over 200 in almost a decade. The last time they achieved the feat was when they scored 236 for 2 to beat Australia in Cape Town in 2011. Since then, South Africa have been set targets of over 200 on 20 occasions, and have lost 17 of those matches , including six in the subcontinent.

Pakistan Vs South Africa: Where to PAK Vs SA Live Streaming?