Pakistan vs South Africa 2021, 2nd Test: Day 2 – Faheem Ashraf And Pakistan Bowlers Set Up A Fine Day For The Hosts 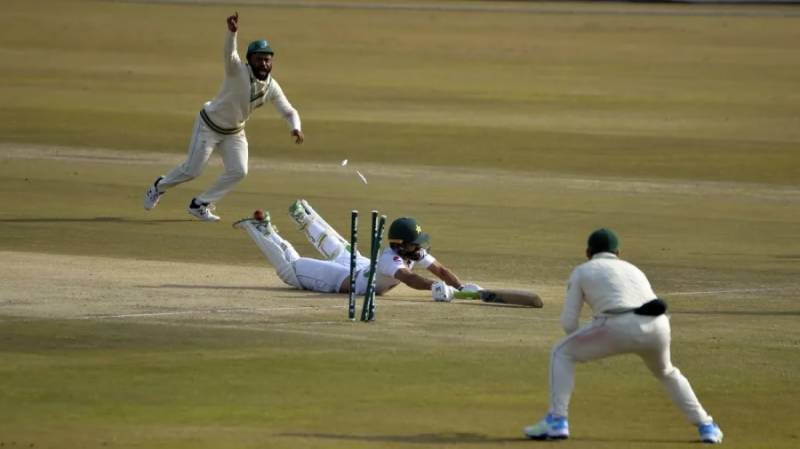 Despite the fighting day of the second day of the Rawalpindi Test, the hosts Pakistan have got the upper hand due to the visitors South Africa’s failure to control the day.

Pakistan started the second day on their overnight score of 145/3. While the hosts were all out for 272 runs, the visitors South Africa scored 106/4 at the stumps of the day. The visitors are still 166 runs behind from Pakistan.

South Africa made a great start of the day by dismissing Pakistan captain Babar Azam (77) on the second ball of the day as Anrich Nortje took that wicket without conceding any run of the day. Soon, last Test’s centurion Fawad Alam (45) was run-out after Temba Bavuma’s brilliant throw.

Then Faheem Ashraf played a big role in that Pakistan innings. At first, he put the crucial 41 runs partnership with Mohammad Rizwan for the sixth wicket. Nortje again broke that partnership as Rizwan was dismissed for 18 runs. However, Faheem continued his strong batting. With the help of tail-enders’ strong assistance with their defense, Faheem utilised that opportunity to stretch the scoreboard over 250 runs.

In the second session of the day, the hosts added 51 more runs before losing their last three wickets. Faheem remained not out on 78 runs off 160 balls (12 fours).

Anrich Nortje claimed his third five-wicket haul in Test career as he had the bowling figures of 24.3-8-56-5. Also, Keshav Maharaj (3/90) got three wickets and Wiaan Mulder (1/40) picked up a wicket.

After setting up the 26-run opening partnership, South Africa lost two back-to-back wickets just before the tea break. Hasan Ali took both those wickets as opener Dean Elgar (15) and Rassie van der Dussen (0) were the victims.

In the third session, Faheem Ashraf took the wicket of Faf du Plessis (17). After scoring 33 runs, another opener Aiden Markram lost his wicket as Nauman Ali picked up that wicket.

In the late moment of the day, Temba Bavuma and captain Quinton de Kock fought hard as they put the 25 runs partnership for the unbroken fifth wicket till the stumps of the day. While Bavuma was not out on 15 runs, Quinton scored 24 not out off just 11 balls (5 fours).