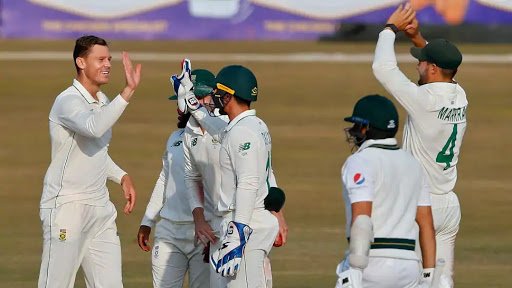 After Mohammad Rizwan’s brilliant century set the big fourth innings target for the visitors South Africa, the top-order batsmen provided a great start for the visitors to set up a thrilling final day of the series-decider match against the hosts Pakistan at Rawalpindi.

Starting the day on the overnight score of 129/6, Pakistan were all out for 298 runs. Chasing down the 370 runs target, South Africa batted strongly and scored 127/1. The visitors are 243 runs away from the victory, while the hosts need nine more wickets to win this Test.

The visitors South Africa started the day with a strong fashion as Keshav Maharaj bowled Hasan Ali for 5 runs. But once again the visitors lost their grip in the game due to wicket-keeper batsman Mohammad Rizwan and the tail-ender batsmen.

At first, Yasir Shah and Rizwan put the 53 runs partnership for the eighth wicket, where Rizwan also completed his half-century. George Linde finally took the wicket of Yasir Shah, who scored 23 runs. At lunch, Pakistan scored 217/8.

Mohammad Rizwan and Nauman Ali set up the big partnership for the ninth wicket that secured their 350+ lead over the visitors. Rizwan finally completed his first Test century in 185 balls.

After the 97 runs partnership for the ninth wicket, Nauman Ali lost his wicket after scoring 45 runs as Kagiso Rabada took his wicket.

Chasing down the big target of 370 runs, South Africa lost their opener Dean Elgar (17) just before the tea break. Shaheen Shah Afridi provided that breakthrough as Elgar was caught behind.

However, the visitors made a strong comeback in the last session where they didn’t lose a wicket but added 90 runs. While opener Aiden Markram has scored 59 not out, Rassie van der Dussen (48*) is two runs away from his half-century. Meanwhile, they have already put the 94 runs partnership for the unbroken second wicket.