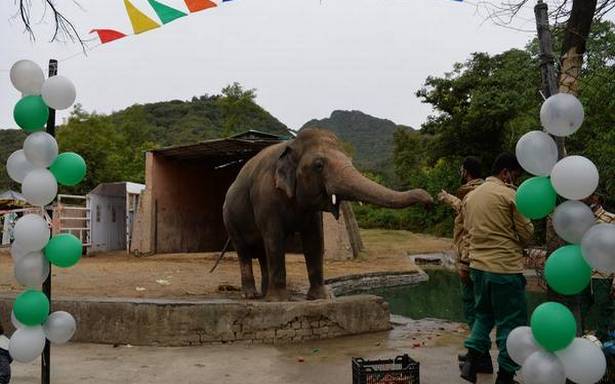 With music, treats and balloons, friends of Pakistan’s only Asian elephant threw a farewell party for the creature ahead of its relocation to Cambodia following years of campaigning by animal rights activists.

The plight of Kaavan, an overweight, 35-year-old bull elephant, has drawn international condemnation and highlighted the woeful state of Islamabad’s zoo, where conditions are so bad that a judge in May ordered all the animals to be moved.

Kaavan is set to be flown to a wildlife sanctuary in Cambodia on Sunday, said Saleem Shaikh, a spokesman for Pakistan’s Ministry of Climate Change, following months of veterinary care and a special training regime to habituate the elephant to a huge metal crate he will travel in.

Kaavan’s plight was given a boost over the years by American pop icon Cher, who publicly campaigned for the elephant’s relocation.

Zoo officials have in the past denied Kaavan was kept in substandard conditions or chained, claiming instead the creature was pining for a new mate after his partner died in 2012.

But Kaavan’s behaviour — including signs of distress such as continual head-bobbing — raised concerns of mental illness.

RELATED:  As Evidence Mounts that Navalny Was Poisoned by State, Russians Just Sigh