Home News Pakistan’s theatrics at the UN pose no challenge for India, says India’s Permanent Representative at the UN

Pakistan’s theatrics at the UN pose no challenge for India, says India’s Permanent Representative at the UN 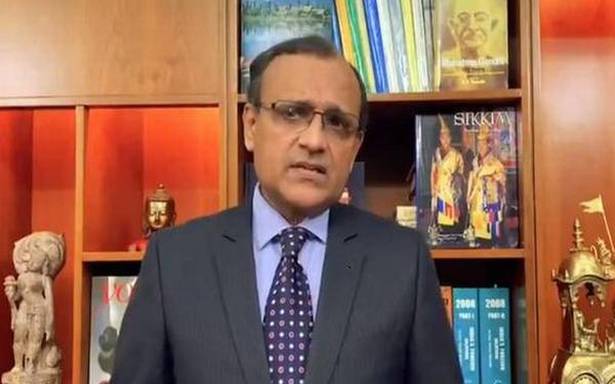 As India takes its seat at the Security Council, Permanent Representative T.S. Tirumurti says Delhi must guard against attempts to dilute the fight against terrorism

Counter-terror cooperation and United Nations reform are at the top of the agenda, says India’s Permanent Representative at the UN, T.S. Tirumurti in a written interview as India takes its seat for the next two years at the UN Security Council, it’s eighth stint as a non-permanent representative from Friday.

As a member of the UNSC beginning January 1, what will India’s first intervention be in the area of?

The Security Council, being the primary organ responsible for peace and security, is theoretically supposed to work round the clock. So, in a way, the clock starts ticking after midnight of December 31. That said, the Tunisian Presidency of the Security Council has planned for two High-Level events in the first two weeks — one on Peace and Security in Fragile Contexts and the other on International Cooperation in Combating Terrorism, where we expect to participate at a high level.

Would India use the UNSC tenure to push for the adoption of the Comprehensive Convention on International Terrorism? What kind of resolutions do you hope to see the UN adopting on the issue of countering terrorism, and in the application of the 1267 committee on ISIL/Al Qaeda?

Counter-terrorism is a major priority area for India when we are on the Security Council. As for the 1267 Sanctions Committee on ISIL (Da’esh), it is important that its decisions are taken in an impartial and apolitical manner and those that refuse to implement its decisions are held accountable. We should guard against attempts by certain member states to politicize the work of the 1267 Committee thereby, again, diluting our fight against terrorism.

The inability of the United Nations to agree on a Comprehensive Convention on International Terrorism (CCIT) remains one of the glaring shortcomings in the international legislative framework which could have boosted enforcement efforts to destroy safe havens of terrorists, their financial flows and their support networks.

Could tensions between India and China at the LAC at present spill over into UNSC as well?

Bilateral issues are best handled bilaterally. As far as we are concerned, we are entering the Security Council with a positive and progressive agenda. We look forward to working constructively with all members and we do hope that we can do so with all members in a similar spirit of constructive cooperation.

In the past year, the UN Secretary General and UN agencies have expressed concern over a number of India’s internal matters such as Jammu & Kashmir, Citizenship Amendment Act, the Hathras rape case, restrictions on NGOs, etc. Will India’s position at the UNSC curb such activism from UN agencies or will there be a greater spotlight on India?

These issues concern India’s internal affairs. The officials who have made comments on these matters were obviously overstepping their mandates. However, we have never hesitated to explain our position on all such issues in detail when questioned since we are dispelling ill-informed pronouncements, motivated or otherwise. We sincerely hope that irrespective of whether we are in the Security Council or not, these UN agencies restrain themselves and deal only with those matters which are within their mandate.

Pakistan has also forwarded a “dossier” of allegations against India on the issue of terrorism in the run up to the UNSC term. How much of a challenge are such actions by Pakistan?

No country or international organisation would humour anyone inciting terrorism and encouraging separatism within UN Member states under whatever justification. The laughable attempt of Pakistan submitting a “dossier”, is yet another farce played out on the international community. A delegation that is universally acknowledged as the epicenter of global terror and refuses to take any action against the terror factories that it continues to churn out has absolutely no credibility. There are, for obvious reasons, no takers in the international community for what is obviously another one of its anti-India propaganda exercises. As far as India is concerned, such theatrics do not pose any challenge.

Can UNSC reform, that India has called for, be achieved during India’s two-year tenure at the UNSC?

The reality is that, while the overwhelming majority of UN Member states firmly support the comprehensive reforms of the Security Council, a handful of status-quoists have consistently opposed any reform. Of course, the reform of the Security Council is not driven by the Security Council but through the so-called Intergovernmental Negotiation (IGN) process under the General Assembly. We are determined to work towards immediate and time-bound text-based negotiations. India’s credentials are known to all. However, our two years in the Council will be one more opportunity to demonstrate to the global community how important it is for the Security Council to be more representative and reflective of contemporary realities.

If there is one single outcome/resolution that you hope more than others will be achieved by the end of India’s UNSC tenure in 2022, what would that be?

While questions like these don’t have easy answers, if there is a single objective which I would like to achieve by 2022 – it is to show the world the importance of “reformed multilateralism” and inevitably the important place that India enjoys in that construct for promoting international peace and security.