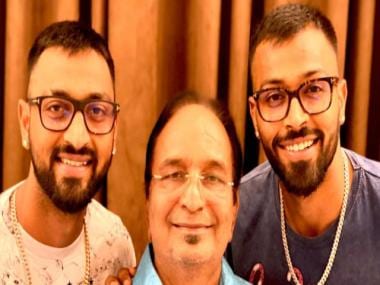 Krunal, who was leading Baroda in the Syed Mushtaq Ali Trophy, has left the bio-bubble created for the tournament to be with his family, association secretary Ajit Lele told PTI.

Hardik is not playing the national T20 tournament as he is preparing for the white-ball series against England.

Himanshu had played a key role in the success of his cricketer sons.

Krunal scored a match-winning 76 in the opening game against Uttarakhand and has also taken four wickets in the first three games.

“Remember meeting uncle for the first time at motibagh. He was so keen for his sons to play good cricket. My condolences to You and family. May god give you strength to pass through this difficult time @krunalpandya24 @hardikpandya7,” tweeted Pathan, himself a former Baroda captain.

Remember meeting uncle for the first time at motibagh. He was so keen for his sons to play good cricket. My condolences to You and family. May god give you strength to pass through this difficult time @krunalpandya24 @hardikpandya7

India skipper Virat Kohli, middle-order batsman Hanuma Vihari, Mumbai Indians — the IPL franchise both brothers represent — and commentator Harsha Bhogle were some of the others who offered their condolences to the Pandya family on Twitter.

Heartbroken to hear about the demise of Hardik and Krunal’s dad. Spoke to him a couple of times, looked a joyful and full of life person. May his soul rest in peace. Stay strong you two. @hardikpandya7 @krunalpandya24 — Virat Kohli (@imVkohli) January 16, 2021

So sorry to hear the news about your father’s demise @krunalpandya24 @hardikpandya7 Stay strong and lots of strength to both of you. May his soul RIP — Hanuma vihari (@Hanumavihari) January 16, 2021

“Our intentions of letting Hardik and Krunal play cricket from a very young age was questioned and criticised by many. But we were not willing to change our plans, and it’s great to see what they have achieved now” – Himanshu Pandya. RIP 🙏 pic.twitter.com/iN6Vd5vDFE — Mumbai Indians (@mipaltan) January 16, 2021

Terrible news for the Pandya family. Heart goes out to @hardikpandya7 and @krunalpandya24. You told me of the role your father played in you guys becoming the cricketers you did. Wish you strength.