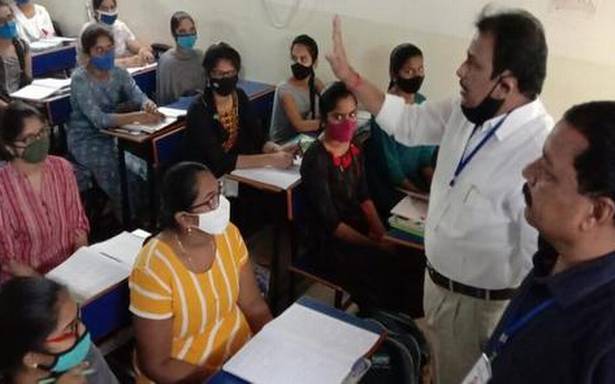 Students of a private college have given a written complaint to Andhra Pradesh School Education Regulatory and Monitoring Commission (APSERMC) over the lack of facilities like laboratories, library and playground.

The college representatives were in jitters when the students also mentioned that they had paid ₹1.30 lakh as fee for the infrastructure. When abstaining contract faculty members are replaced by new ‘graduates’ on a daily basis, the students also complained of missing out on continuity in lessons.

Accompanied by Regional Joint Director Viswanatha Naik and Regional Intermediate Officer V. Sreenivasulu Reddy, panel members V. Narayana Reddy and B. Eswaraiah made a surprise visit to a couple of private junior colleges in New Balaji Colony here on Wednesday when they were taken aback to see 90 students seated in one classroom, against the 40 mandated as per the COVID guidelines.

The fan had been turned off and windows kept closed to prevent outside noise and smoke emanating from the neighbouring tea stall, making it look like a dungeon. “It was absolutely dark and suffocating, which the students had no option but to endure”, Prof. Narayana Reddy told the media conference later.

Blaming the parents for not monitoring the facilities available at the institutions where their wards studied, the commission insisted on formation of parents’ committees to facilitate regular interaction with the management. On the ‘hefty fee’ being collected by some institutions, especially in rural areas, he said such institutions would be sternly dealt with. As corporate education has percolated down to the mandal level, Prof. Reddy said the State-prescribed fee structure would be prominently displayed in the village secretariat buildings and at Panchayat offices.

Panel to take action as studentscomplain about lack of facilities