Home EntertainmentBollywood Pankaj Tripathi on his film ’83: Took advantage of my seniority to admonish my co-actors

Pankaj Tripathi on his film ’83: Took advantage of my seniority to admonish my co-actors 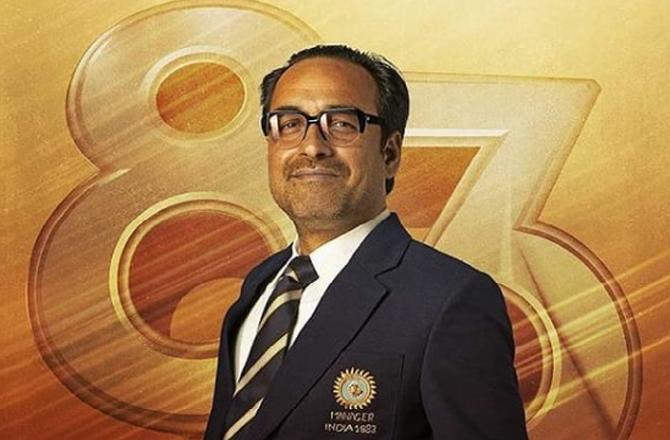 Pankaj Tripathi is arguably one of the most exciting actors we have in the Hindi film industry currently. His movie choices and performances are always a treat to watch. This year, he has had Gunjan Saxena: The Kargil Girl, Ludo, and Mirzapur 2, and each of them had something refreshing to offer. The actor is now gearing up for Kabir Khan’s ’83.

This ensemble is based on the 1983 World Cup which the Indian Cricket Team won under the guidance of their coach Man Singh, the role that Tripathi essays. And when asked about his experience of shooting the film, he told Mumbai Mirror, “I’d take advantage of my seniority and my role to admonish them sometimes, and if we packed up early, I’d regale them with stories and my extensive knowledge.”

The film has gone through a lot of changes in its theatrical release. It was first slated to release on April 5, 2019, then August 30, 2019, and then April 10, 2020. But due to the lockdown, it was postponed again. But Tripathi believes a film like this deserves the big screen experience.

He said, “When you watch the film with people around, you will feel like you are in a stadium, watching India lift the World Cup.” Ranveer Singh plays Kapil Dev and Deepika Padukone essays the role of his wife, Romi Bhatia. The ensemble also includes Jatin Sarna, Saqib Saleem, Tahir Raj Bhasin, Harrdy Sandhu, Chirag Patil, and Ammy Virk.

In an interaction with Neha Dhupia on her show No Filter Neha, there were a lot of revelations by Kabir Khan about his life prior to filmmaking, how Bollywood saved him, and his tryst with gangsters. But the anecdote that stood out was his visit to Kapil Dev’s house with Ranveer Singh.

Talking about the same, Khan said, “We just took our bag and baggage and landed up in Delhi. I really don’t know, so see, Romiji and Kapil Dev are just the most gracious hosts, I mean, for them they would always say, our house is always open for you, a lot of people say that and I don’t think you’re supposed to take that seriously and ‘hey! You said your house is open’ so Ranveer and I just landed there.”

He added, “No it was a fabulous time to be able to trail Kapil Dev everywhere. I remember when Ranveer Singh went like, sir, we’ll sit, you do the meeting, we’ll be fly on the wall. He said, Ranveer Singh is in my room so there will be no fly on the wall, like there’d be no meeting.”

And this is what the filmmaker had to say on signing Singh for the role of Dev. He said, “Both of them are very health conscious, Kapil sir just loves playing Golf, he can spend 10 hours on a Golf course. In fact, what he was really unhappy about was that we were stopping him from playing Golf enough. But one day I remember going with him and it was hot in Delhi and Ranveer and I were walking with him for 4 hours. And Ranveer and I were just looking and wondering if this guy is going to stop walking or is he just gonna keep playing Golf. But I think it was a very important stage for our prep, those two weeks that we spent over there, especially for Ranveer. Of course, not taking anything away from Mr Gaikwad, who has done the look for the film, but today, if people are reacting in a certain way and saying that how did Ranveer Singh end up looking exactly like Kapil Dev.”

Also Read: Tahir Raj Bhasin: Going Back In Time To Relive An Iconic Slice Of Cricketing History Instantly Drew Me To 83!