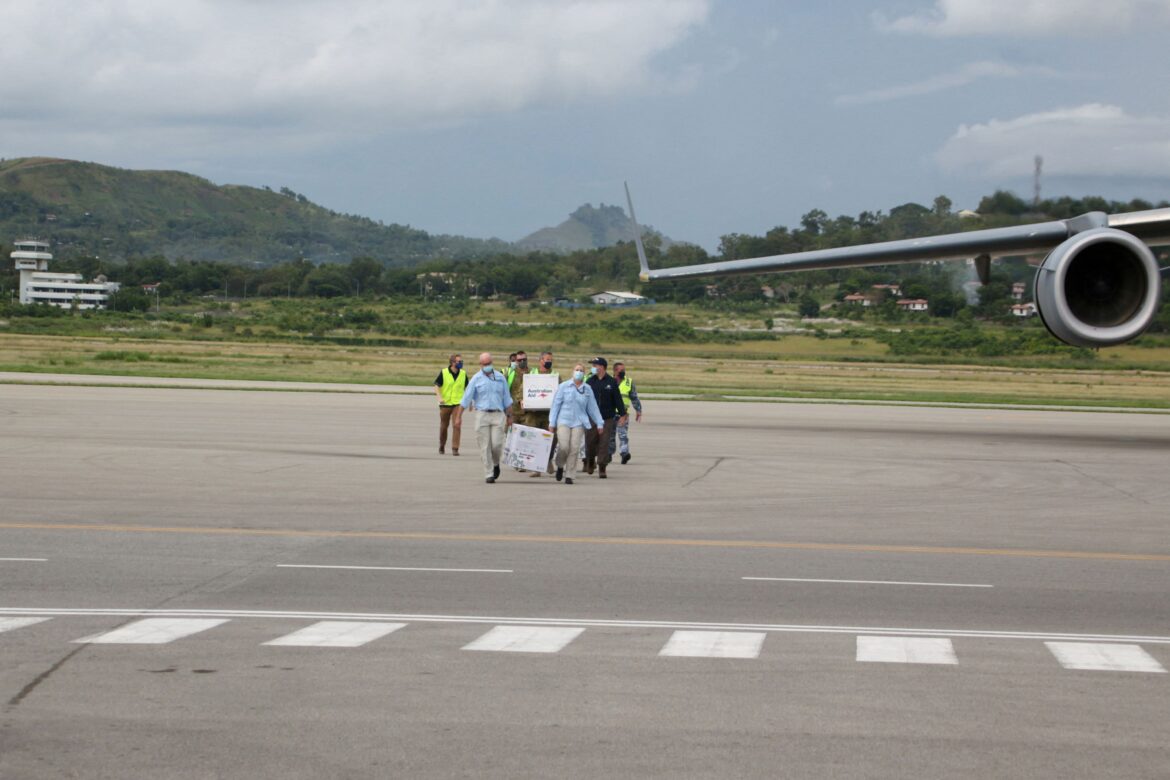 Australian officials carry boxes containing some 8,000 initial doses of the AstraZeneca vaccine following their arrival on board a Royal Australian Air Force plane at the Port Moresby international airport on March 23, 2021, as Papua New Guinea raced to quell a Covid-19 surge overwhelming its fragile health system.

The coronavirus crisis that has gripped Papua New Guinea continues to worsen, as the Indo-Pacific nation waits in earnest for vaccines to arrive.

In just one week — between March 22 and March 28 — there were 1,786 new reported cases of Covid-19 and 13 deaths, according to the latest report from the World Health Organization and the PNG National Department of Health.

The weekly joint report said that as of March 28, noon local time, the island-nation reported 5,349 total cases and 49 deaths. It was the eighth consecutive week of increases.

Papua New Guinea is a heavily forested nation of fewer than 9 million people that lies about 100 miles (160 km) north of Australia at their closest point.

Health system as ‘risk of collapsing’

The situation on the ground in PNG is said to be dire and international organizations such as Medecins Sans Frontieres (MSF) have warned of an imminent collapse of the country’s overwhelmed health-care system.

“The health system in PNG is at risk of collapsing, as health facilities managing COVID-19 are close to capacity and almost too stretched to provide regular basic healthcare,” MSF said.

The Pacific island state has only about 500 doctors, less than 4,000 nurses, and below 3,000 community health workers, according to data the prime minister shared last year during an address to parliament. There are just about 5,000 bed spaces in hospitals, he added.

MSF, which provides medical humanitarian assistance to countries in crisis, said that an increasing number of health-care staff in PNG tested positive for Covid-19, forcing them to quarantine at home. Health facilities managing the outbreak are close to full capacity, resulting in longer waiting times.

interim head of mission for Papua New Guinea at MSF

“We’ve got already a poor health-care system and then you’ve also got high levels of comorbidities that are also going to impact with the Covid-19 crisis,” Schuetze told CNBC on Wednesday. “So, you have malaria in the country, you have multi-drug resistant tuberculosis as well as a range of other illnesses that could compound the impact of Covid-19.”

A large number of people also live in rural or remote communities where it’s hard to access the same level of health care as those living in urban centers such as Port Moresby, the capital of Papua New Guinea, she added.

According to the joint report from WHO and the health department, only 7,061 Covid tests were conducted between March 22 and March 28 — that means 25.29% of those tests returned positive.

Large-scale testing remains low across most of the country and there’s a shortage of tests kits as well as logistical difficulties, the report noted. That suggests the actual number of infections across the country may be significantly higher than what is being formally reported.

As isolation wards filled up in hospitals, PNG turned a sports complex into a temporary field hospital for Covid-19 patients.

MSF said on Friday that it is supporting local health services by providing staff and cartridges to analyze samples of polymerase chain reaction tests that are widely used to detect the coronavirus. Almost 40% of the people getting tested at one of the health facilities have Covid-19, according to MSF. The organization expects more cases in the coming weeks.

MSF also said it only has enough testing cartridges to last up to two weeks.

He added that MSF is calling on organizations in the region to act and mobilize quickly to increase their support to the Pacific nation.

PNG this week rolled out its vaccination drive using the 8,000 doses of AstraZeneca’s Covid-19 shots that Australia donated.

The country’s prime minister Marape received his first dose on Tuesday, according to reports.

Rising vaccine nationalism around the world is making it more difficult for small, developing nations such as PNG to access shots to inoculate their population.

Many of them rely on a global vaccination initiative called Covax, which aims to ensure equitable distribution of shots in less wealthy countries. It is co-led by WHO, Gavi — the Vaccine Alliance, and the Coalition for Epidemic Preparedness Innovations.

Amnesty’s Schuetze said one of the challenges with the Covax facility is that not enough countries are donating sufficient money and resources, or supplying enough vaccines, to ensure a more equitable distribution.

PNG is due to receive around 588,000 doses of vaccine from Covax by June.

Australia, for its part, has reportedly asked the European Union to release 1 million doses of AstraZeneca’s vaccine to PNG. It was initially contracted to go to Australia. Reuters reported last week that the EU has yet to respond to that request.

Canberra has also reportedly asked the U.S., Japan and India — the other members of the informal Quad alliance — to help PNG.

Meanwhile, vaccine skepticism and the spread of misinformation is making matters more complicated in the island-nation. Opposition leader Belden Namah reportedly asked the government to suspend the rollout of the AstraZeneca vaccine, alleging it was exposing citizens to potential serious harm.

The PNG government needs to do more to educate and inform the public about vaccines and health-care treatment on Covid-19, Amnesty’s Schuetze said.