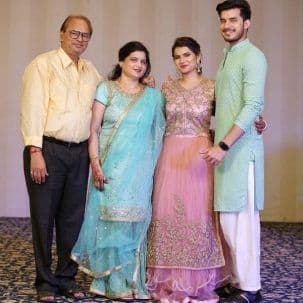 Anupamaa actor Paras Kalnawat is bereaved as his father, Bhushan Kalnawat passed away on Saturday. He suffered a massive heart attack. It seems he collapsed in the lift of the building and was rushed to the hospital. Paras Kalnawat was busy with his shoot and got a call. He rushed to the hospital in the bike of a production team member. Hearing this news, the whole cast of Anupamaa, including lead actors Rupali Ganguly and Sudhanshu Pandey reached the hospital. It seems the actor’s father breathed his last before he could reach him. Also Read – Anupamaa: Rupali Ganguly, Sudhanshu Pandey and team have fun on the set during the Holi shoot – view pics

A source close to Paras Kalnawat told the media, “He got a call from his mother who was crying on the phone. She informed him that his father had collapsed in the lift and that he was being taken to the hospital. Paras rushed to the hospital but by the time he reached there, his father had passed away. His co-actors Rupali Ganguly and Sudhanshu Pandey are with him at the hospital, along with other cast and crew members. The shooting of the show has been stalled for a few hours. Everyone on the set is in a state of shock.” Also Read – Anupamaa: Let us take a look at Sudhanshu Pandey aka Vanraj’s personal life — view pics

This is indeed saddening news. In the month of February, he had tested positive for coronavirus and was on a break. His whole family got tested. But his father’s test came out as negative. Paras Kalnawat said, “Thankfully, my dad, who is not only a diabetic but also had an angiography sometime back, has tested negative and that’s a big relief.” As of now, people will get to see the Holi sequence on the show. Anupamaa will end up having Bhaang that has been mixed for someone else. In an intoxicated state, she ends up playing Holi with Vanraj. Anupamaa is the top rated show on Indian TV. Also Read – These fun pictures of Anupamaa co-stars Anagha Bhosale and Paras Kalnawat will remind you of your best friend