Home News Parliament proceedings | India has risen like a phoenix from the ashes of coronavirus, says Scindia

Parliament proceedings | India has risen like a phoenix from the ashes of coronavirus, says Scindia 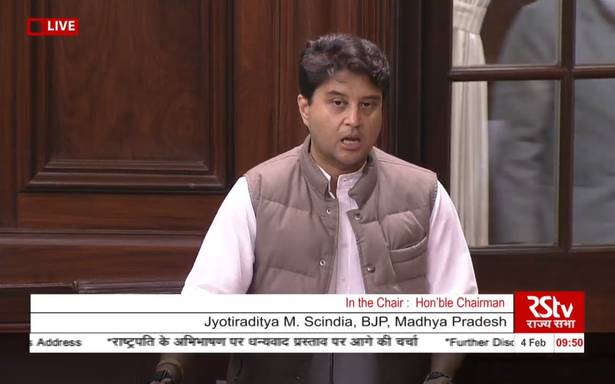 Rajya Sabha is continuing discussion on the Motion of Thanks on the President’s Address on Thursday. The House is expected to vote on the Jammu and Kashmir Reorganisation (Amendment) Bill, 2021 as well. On Wednesday, the Upper House allotted an additional five hours for discussion on farmers’ protests and other relevant issues. He says that farmers are the backbone of our society, and they need to be treated right.

Speaking on the events of Republic Day, he says all political parties have condemed the actions of the miscreants and agree that they need to be punished. But the farmers’ issue should not be mixed with it. The whole thing should be dealt with amicably.

My concern is for the farmers, he says.

Suppression of dissent in our democracy is deplorable, says Digvijay Singh

Digvijay Singh continues to speak on Motion of Thanks on President’s Address.

Addressing vaccine hesitancy, he criticises the budget set aside for vaccination as low and points out that the permit is only for emergency use.

The farm Bills are anti-farmers, he says.

The hoisting of cases against farmers, journalists, activists and such need to stop, he says. “We respect the mandate you have, but the way in which dissent (which is the backbone of a democracy) is being suppressed in our country is deplorable,” he says.

He mentions Sudha Bharadwaj, who was been jailed for over 3 years. “She was a Harvard professor and now she is languishing in jail for supporting Dalits in Bhima Koregaon,” he says.

Digvijay Singh (Congress, Madhya Pradesh) speaks on Motion of Thanks on President’s Address.

“I am opposing President’s address because he did not mention the facts anywhere,” says Mr. Singh.

He says that the gap between Modi government’s promises and implementation of those promises are huge.

He also speaks about how the lockdown was announced strategically to form government in Madhya Pradesh.

“In Singapore, they gave 8 days notice before lockdown. But in a country as vast as India, just 4 hours? PM Modi misused the federal structure in this decision,” he says, going on to speaking about the effect of lockdown on migrant workers, including pregnant women and children who had to walk for kilometres to get home.

Call for Aatmanirbhar Bharat similar to that of Swaraj, says Scindia

Jyotiraditya Scindia continues to speak on Motion of Thanks on President’s Address.

After mentioning the schemes the central government has set aside for farmers, Mr. Scindia speaks on the events that occured on Republic Day. He says that the members of the House insulted the country by their conduct during President’s Address. He compares the call for Aatmanirbhar Bharat to that of Swaraj from British rule. 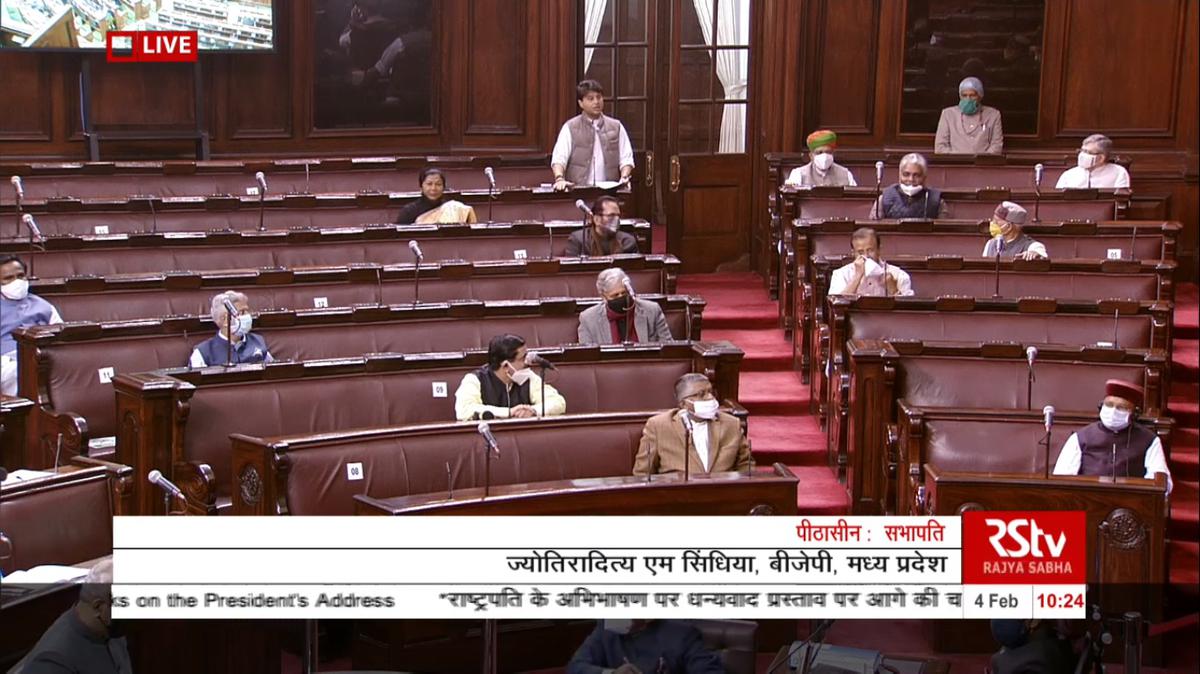 Lighter moment in the House as Congress leader Digvijay Singh is called next to speak on the issue. Chairman Naidu says that was the order he was handed, and he didn’t switch names on purpose, as the House laughs. Mr. Singh laughs as well, and says Mr. Scindia spoke as well as he used to speak when he was Congress even now, and Mr. Scindia replies, “thanks to your blessings.”

“You had my blessing before, you have it now, and you’ll have it forever, regardless of which party you were in, are in now, and will be in future,” says Mr. Singh, smiling.

India has risen like a phoenix from the ashes of coronavirus, says Scindia

Jyotiraditya Scindia (BJP, Madhya Pradesh) speaks on Motion of Thanks on President’s Address. Mr. Scindia says 2020 was a challenging year for the whole world. But after a year, looking at the falling COVID-19 cases there is a new sense of energy. India has risen like a phoenix from the ashes of coronavirus, he says. He adds that India’s recovery rate from COVID-19 is high compared to the rest of the world.

He goes on to praise PM Modi and government for their timely action that contributed to this, and cites the example of emergency to counter allegations that the lockdown was not implemented in an intelligent manner.

“The country followed the lockdown [during coronavirus pandemic] on the request of one person. There was another lockdown in 1975 when the whole country was converted into a jail. This is something I used to stay standing there also,” he says, pointing towards Opposition Benches. Mr. Kumar says the government should be magnanimous in considering the farmers demands.

He says Andhra Pradesh government should consider the demands of the Amravati farmers who have been protesting for 415 days.

Swapan Dasgupta (nominated from West Bengal) speaks on Motion of Thanks on President’s Address. 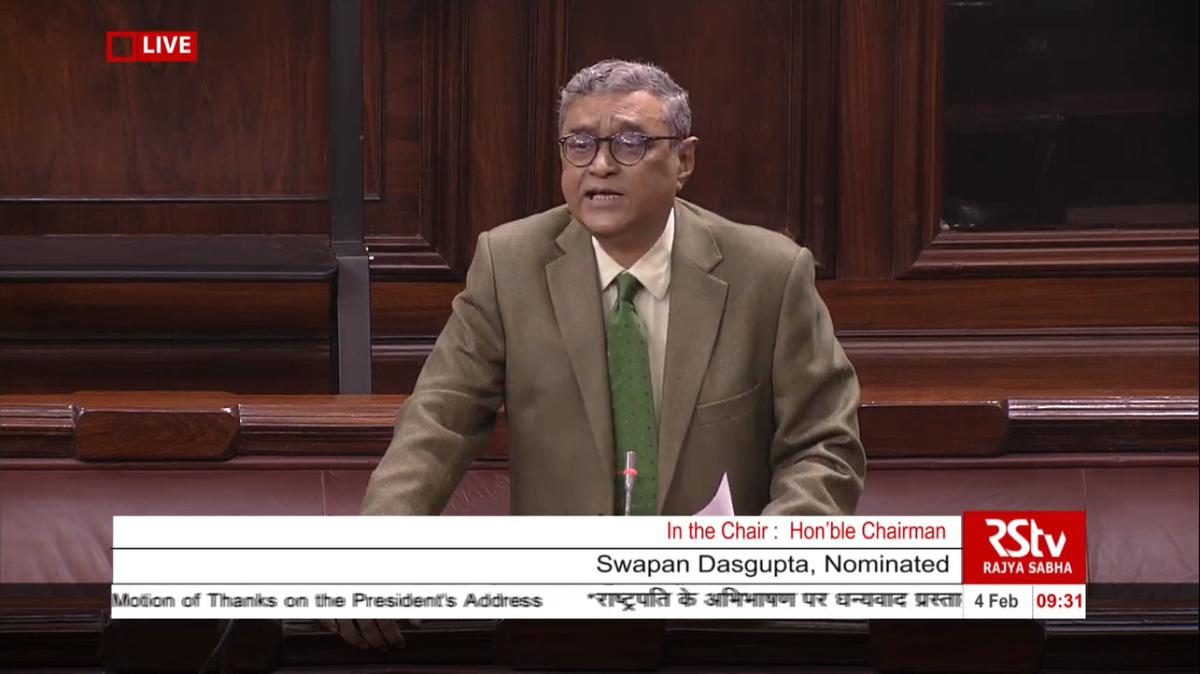 Mr. Dasgupta says when civil servants from East India Company used to be sent from Britain to India they were given instructions, and one thing they were told was that for everything that is true about India, the opposite is also true.

The top 2 lakh farmers of Punjab and Haryana have incomes in the top 8% in the country, but this is not a situation that prevails in the whole country, he says.

“Most farmers undertake subsistence farming. They need other occupation to survive,” he adds.

“We need an integrated approach to whole eastern region of India, he says.

Our democracy is strong, it will not be weakened by anyone’s tweet: Jha

RJD MP Manoj Kumar Jha, hailing from Bihar, speaks on Motion of Thanks on President’s Address.

We should learn from history, says Mr. Jha. Soon as protests started, the media starts talking of the “Pakistani angle and Khalistani angle” with regard to farmers’ protest, he says. This is not right, he adds. Citing a portion of the President’s Address on the importance of democracy, he says that whatever we have seen recently has been against the Constitution.

Our democracy is strong, it will not be weakened by anyone’s tweet, he says, addressing government’s response to tweets by Rihanna and Greta Thunberg on farmers’ protests.

He goes on to recite a short poem on nationalism and revolutionary spirit.

MP Jairam Ramesh requests that more members be allowed in the Rajya Sabha hall to create an atmosphere of debate. Currently, members are spread across Rajya Sabha and Lok Sabha halls in adherence of COVID-19 protocol. Chairman Naidu says they will discuss the issue later.

Discussion on Motion of Thanks on President’s Address resumes.

Motion of Thanks on the President’s Address

Highlights of the President’s Address 2021

Motion of Thanks on the President’s Address

Highlights of the President’s Address 2021