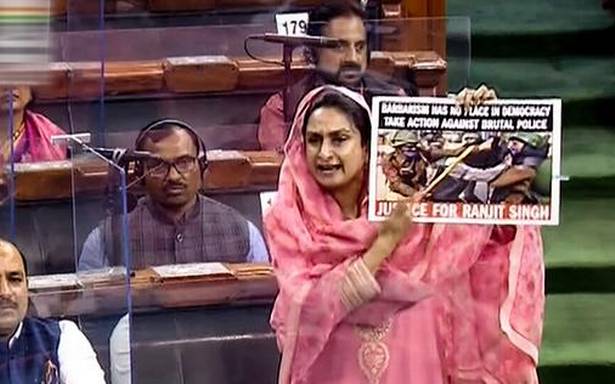 Opposition members, while participating in the motion of thanks debate to the President’s address in Lok Sabha on Tuesday, targeted the Modi government over the farm laws, with former Union minister and Shiromani Akali Dal (SAD) leader Harsimrat Kaur Badal accusing the government of becoming ‘inhuman’ not to see the plight of farmers.

Defending the farm laws, BJP Meenakshi Lekhi said they were brought in to end farmers suicides in India. The fact that the world is now discussing the protests in India over the farm laws instead of the corona virus indicates that there is an international conspiracy to defame India, she added.

Ms Lekhi alleged that the farmers’ protest was “a Molotov cocktail of Khalistanis, PFI [Popular Front of India] and ISI [Inter Services Intelligence] agendas at the behest of masters sitting in Beijing.”

Ms. Badal of SAD, who quit the BJP-led National Democratic Alliance (NDA) over the farm laws, said when the laws were first brought in as ordinances by the Modi government, she had urged her cabinet colleagues to have wider consultation. “We were told that it [consultations] will happen, when we bring a law,” she recalled.

The SAD leader also claimed that she had submitted a letter to the Agriculture Minister against the farm laws after she had ascertained the views of the farmers. Ms. Badal said while the farmers are braving the biting cold of Delhi for over 70 days at the borders of Delhi, the government has shut its eyes and ears.

She also questioned the intelligence failure in preventing the January 26 violence and pointed out that it was known a day before (January 25) that there was call to deviate from the laid down route and move towards Red Fort.

Another former NDA ally, Hanuman Beniwal of Rashtriya Loktantrik Party, said the BJP will pay a price for their arrogance in the 2024 Lok Sabha polls.

Trinamool’s Saugata Roy accused Union ministers of resorting to “political tourism” in West Bengal and accused the BJP of following a divisive agenda. Referring to Prime Minister Modi getting emotional in the Rajya Sabha while giving a farewell speech for Ghulam Nabi Azad, Mr Roy urged Mr Modi to shed a few tears also for the farmers who died in the course of the farm protests.

Countering Mr Modi’s aandolan-jivi [professional protester] jibe, All India Majlis-e-Ittehadul Muslimeen (AIMIM) MP Asaduddin Owaisi said, “Yes there will be andolans (agitation) as Narendra Modi is not the emperor and those days are gone.”

Danish Ali of the Bahujan Samaj Party said that though his party believes against any international interference in India’s internal matter, he reminded the House that Prime Minister Modi had used the slogan of Abki Baar Trump Sarkar slogan in the United States during his visit.

BJP’s Rita Bahuguna Joshi hailed Mr Modi for his foresight in curbing the COVID-19 pandemic and asserted that the Prime Minister has been steadfast in his resolve to serve the poor and farmers.