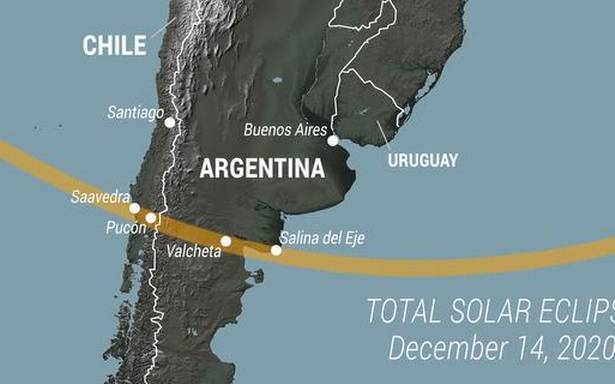 It is absolutely safe to eat, drink, and carry out your daily activities during an eclipse.

Parts of Chile and Argentina will witness on December 14 a total solar eclipse, where the Sun will be completely blocked by the Moon.

A solar eclipse is a natural phenomenon that occurs when the Moon comes between the Sun and the Earth. There are three types of solar eclipses – total, partial and annular.

Today’s eclipse is expected to start after 11:30 a.m EST (10 p.m. IST) and last up to 2 minutes and 40 seconds, depending on the location. The next total solar eclipse visible over South America will be on December 4, 2021.

NASA will provide live coverage of today’s solar eclipse on their website after 8:10 p.m. (IST).

It is not advisable to look at the Sun during a solar eclipse with naked eyes. Only eclipse glasses that have a certification with “ISO 12312-2 international standard” are safe for use, according to NASA. Other options are the number 14 welder’s glass or a pinhole projector that allows a user to project the image of the sun on paper or cardboard.

It is absolutely safe to eat, drink, and carry out your daily activities during an eclipse.