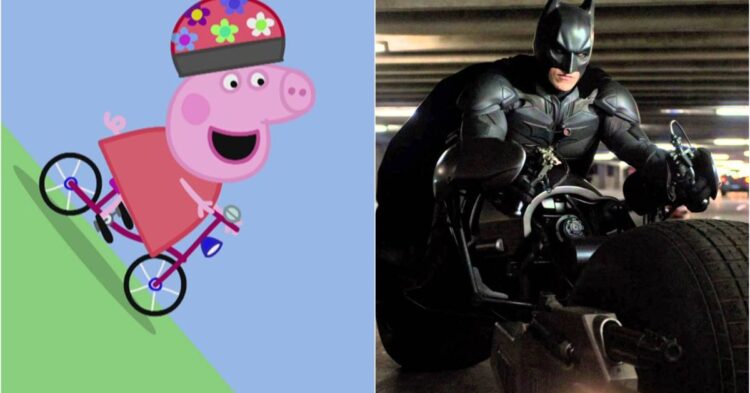 The title may be a little out there, but it’s over a year into the pandemic, and one can only write about re-watching The Office so many times. So, I decided to amuse myself and you, dear reader, by drawing character names out of a bag entirely at random and writing about what a fight between the two would be like and who would win. Silly? Absolutely. But, I now need to know who would win in a fight: the “Dark Knight Detective” Batman or the animated global juggernaut that is Peppa Pig?

Let’s set the stage: Peppa gets an invitation to come visit her pen pal in Gotham. Of course, her friend turns out to be none other than Maggie Magpie (who for the sakes of this is an actual bird).  Maggie’s favorite game is hide-and-seek – but not the normal hide-and-seek Peppa is used to – she plays it with ordinary objects, not people! This was odd for Peppa at first, but she got used to it in no time! They went about the town playing hide and seek with many items, but jewelry that reminded Peppa of birds was Maggie’s favorite.

But just as they were getting into the swing of it, a boy showed up – Bruce Bat – and he wanted them to play his game instead. His game was much different; it was a game of tag, but Peppa and Maggie did not want to chase Bruce around because he cheated: he would fly away whenever either of them would get near, making it impossible for them to tag him. This wasn’t fair to Maggie and Peppa, so they decided to go back to Maggie’s house for dinner, leaving Bruce to mope about in the night. But that’s okay – Bruce Bat awfully likes moping about in the night by himself. Perhaps his friend Peter Penguin would care to play tag.

So there you have it: the definitive answer as to why Peppa Pig would win in a fight against Batman: the short version of that is because she’s more mature. Of course, this is just the “bedtime story” version; to get the unedited, gritty version with naughty words and everything, follow me on OnlyFans (just kidding).

Having spent far too much time in front of the television growing up, Eden has lots of opinions about television (as well as movies and everything else). She puts this to good use along with her journalism degree and writing experience with by-lines over the years in many print publications, books, and online media outlets. You can find her on Twitter at @Edenhasopinions