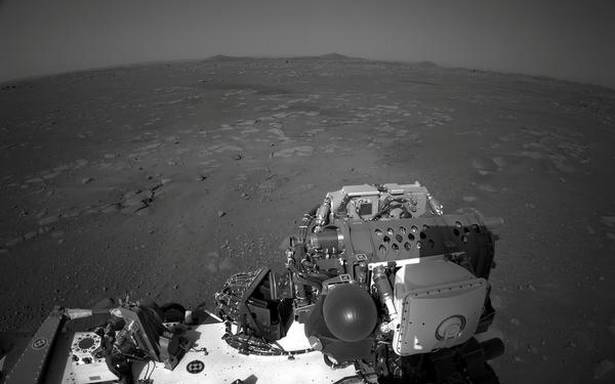 Sridhar is a lead system engineer at NASA’s Jet Propulsion Laboratory (JPL) in Pasadena, California for SuperCam on the Mars 2020 Perseverance rover, which is on a mission to search for signs of past life on the Red Planet.

Vishnu Sridhar, a 27-year-old Indian-American lead system engineer with NASA’s Perseverance rover, has said that the most exciting work on the awe-inspiring Mars mission will happen in the coming weeks.

Mr Sridhar, who is from Queens, New York, is a lead system engineer at NASA’s Jet Propulsion Laboratory (JPL) in Pasadena, California for SuperCam on the Mars 2020 Perseverance rover, which is on a mission to search for signs of past life on the Red Planet.

He said some of the rover’s most exciting work will be done in the coming weeks.

SuperCam is a remote-sensing instrument that will use laser spectroscopy to analyse the chemical composition of rocks on the Martian surface. It analyses terrain that the rover cannot reach. It is an instrument designed to scan rocks and minerals-from up to 20 feet away-to determine their chemical makeup.

The Perseverance rover was launched on July 30 last year and successfully landed on Mars on February 18 this year. The rover, the SuperCam, and its other devices together will help scientists search for clues of past life on Mars. Its predecessor Curiosity is still functioning eight years after landing on Mars. The two-year Perseverance mission is NASA’s latest and most advanced mission to find evidence of past life on Mars.

Mr Sridhar said it was important that the mission was happening despite the ongoing COVID-19 pandemic.

“NASA missions are clearly trying to explore and answer the basic question. Perseverance is also trying to seek that, and eventually answer the question that was there life on Mars, was there life outside Earth, and it was definitely a tough period for us during COVID-19 and for everyone else around the globe,” he said.

“And that’s why I love the name of Perseverance because we persevered through the pandemic and there was a paradigm shift, we learned a lot about how to do engineering remotely. And we went through all that we learned and now we are successful on Mars and it’s a great achievement for humankind,” he said.

Mr Sridhar’s time at JPL over the past five years has been dedicated to Mars and is currently the instrument engineer for SuperCam on the Mars 2020 Rover.

“Summer 2019 was when instruments came in from France and Los Alamos and when we physically integrated SuperCam with the Perseverance rover. That’s something I will cherish for the rest of my life, to have touched and worked on a piece of hardware that’s on its way to Mars,” he reminisced.

The US space agency on Monday released the first audio from Mars, a faint recording of a gust of wind captured by the Perseverance rover. Perseverance will attempt to collect 30 rock and soil samples in sealed tubes to be sent back to Earth sometime in the 2030s for lab analysis.

The rover is only the fifth to set its wheels down on Mars. The feat was first accomplished in 1997, and all of them have been American. The US is aiming for an eventual human mission to the planet, though planning remains preliminary.

Mr Sridhar attended Aviation High School in Queens and grew up in Rego Park. He graduated in Aerospace Engineering from Georgia Tech and has always been fascinated by flight and space exploration.

“One of the key events that sparked my interest in space and exploration was watching National Geographic. The Carl Sagan TV show Cosmos,” he said.

According to his NASA profile page, while in elementary school he wanted to become a National Geographic photographer and travel the world.

Ms Mohan, who leads the guidance, navigation, and control operations of NASA’s Mars 2020 mission, was the first to confirm that the rover had successfully touched down on the Martian surface.

“Touchdown confirmed! Perseverance safely on the surface of Mars, ready to begin seeking signs of past life,” Mohan announced, prompting her colleagues at NASA to fist-bump and break into celebrations.