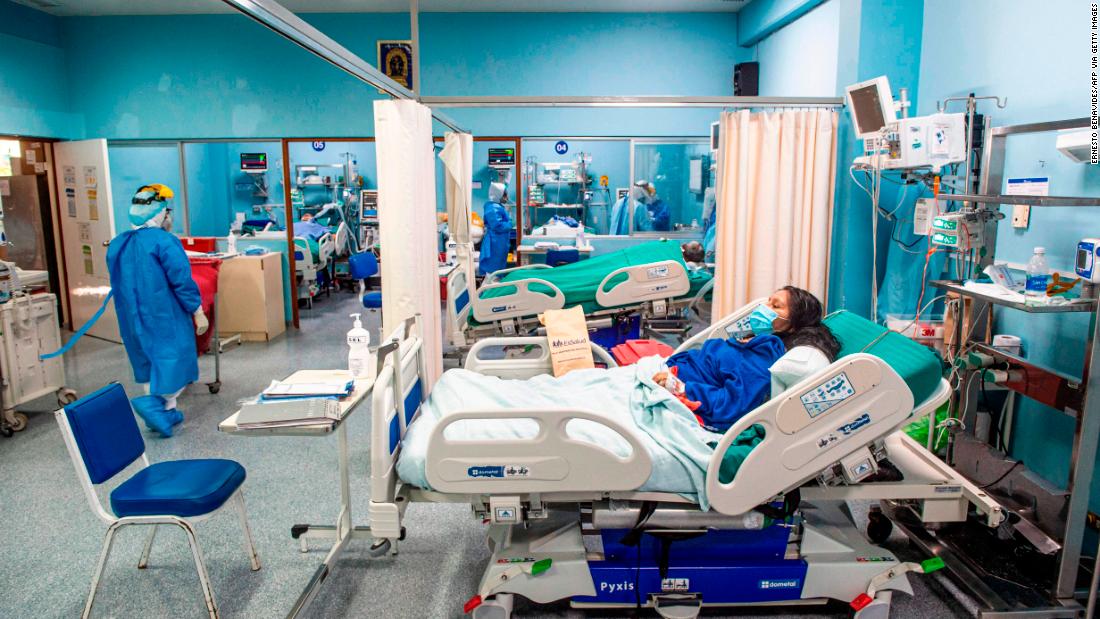 The country is also racing to address a shortage of intensive care unit (ICU) beds for Covid-19 patients, Peru’s President Francisco Sagasti, said during a televised address on Tuesday evening.

An aggressive second wave has seen Peru pass 40,000 Covid-19 deaths on Tuesday, according to data released by the country’s Health Ministry.

Infections are also spiraling — with about 100,000 new cases recorded in the last month alone — as officials warn of burned out doctors and overwhelmed intensive care wards.

Alicia Abanto, an official at Peru’s Ombudsman office, told CNN that Sagasti’s announcement was a good step amid the aggressive second wave, but it probably won’t be enough.

She explained that 1,829 of Peru’s 1,931 ICU beds in the country are currently occupied. “There are only 102 beds available across the country, and this figure is not enough for a country with 25 regions,” Abanto said.

The shortages could soon force doctors into painful choices. Dr. Rosa Luz López oversees the ICU at Guillermo Almenara Hospital in Lima. Her team decides which patient gets an ICU bed when one is available.

“You are doing what you can.. that’s it, it is like flipping a coin,” she told CNN.

So far, they have managed to triple the number of beds in her unit, but López says it will not be enough.

Meanwhile, Jesus Valverde, President of the Society of Intensive Medicine and a doctor at Dos de Mayo hospital in Lima, told CNN he has asked health officials to not add any more beds — because there are not enough doctors to cover them.

Doctors are stretched too thin across the country, he says.

All 50 beds in his hospital’s ICU beds are occupied, and his colleagues are “exhausted, tired, sick,” he says.

Nationwide, covering the more than 1,800 occupied ICU beds would ideally require 1,250 doctors, he said. Instead, the country’s “600 doctors are working double or triple shifts to cover this shortfall.”

Last week, a handful of Peruvian medics went on a hunger strike to demand more investment in the country’s health sector.

Amid mounting criticism, President Sagasti said Tuesday that Peruvians should expect the first million doses of China’s Sinopharm vaccine to arrive in the next few days.

The vaccine has yet to be approved by Peruvian regulators, but Sagasti said the government plans to begin the vaccination campaign in February with frontline health workers getting the immunizations first.