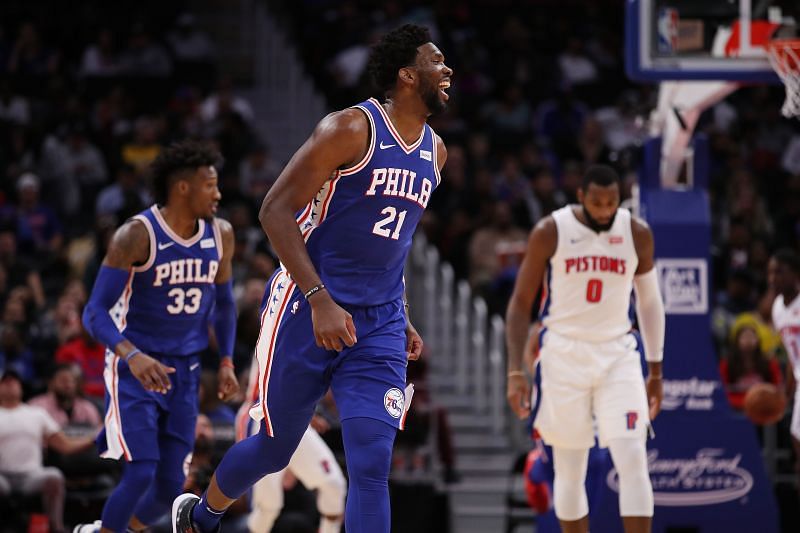 NBA action continues as the red hot Philadelphia 76ers take on the slumping Detroit Pistons in the first of a two-game mini-series this Saturday.

Joel Embiid and the Philadelphia 76ers buried their Eastern Conference rivals, the Boston Celtics, in an emphatic fashion, beating them twice in back-to-back games. Embiid continues to dazzle with MVP-caliber numbers as he dropped 42 points and 10 boards in the first game against the Celtics and then followed it up with 38 points and 11 boards in the second game.

Meanwhile, the Detroit Pistons fell to the Houston Rockets 103-102. All is not well in Motor City this season as the Pistons have been the definition of rock bottom. Despite the presence of some All-Star caliber players on their roster, the team has not been able to get their act together and appear to look weaker with each passing game.

The Philadelphia 76ers have put the league on notice with their dominating performance against the Boston Celtics. Joel Embiid, Tobias Harris and Ben Simmons have been bullying teams under the rim with their size and skill.

The Philadelphia 76ers look determined to not let any team in the East take over them anytime soon. In their last outing against the Celtics, the 76ers played efficient basketball, shooting 55.6% from the field as a team.

The struggling Detroit Pistons should be easy pickings for the in-form Philadelphia 76ers, who could add two easy wins to their already impressive 11-5 season record.

The big man from Cameroon has come out with a purpose this season — to take his Philadelphia 76ers deep into the playoffs.

Joel Embiid is filling the stat sheet with MVP-caliber numbers. He has a combined total of 80 points in his last two games and could explode for another big-game performance against the worst team in the association, the Detroit Pistons, on Saturday.

To say that the Detroit Pistons are having a bad season would be an understatement. Their 3-12 season record is the worst in the association.

The Detroit Pistons will require nothing short of a miracle to steal a win at home against the Philadelphia 76ers.

In their last outing, the Pistons fell to the Rockets 103-102. Jerami Grant led their effort with a team-high 21 points to go with eight rebounds and three assists.

Wayne Ellington and Delon Wright dropped 18 points each but could not make it count in the final stretch of the game.

Jerami Grant is the only player who has scored 20 points or above in the Detroit Pistons’ last five games and will probably be the key player in their next two games with the Philadelphia 76ers.

Grant will need to pull off a monster performance to have any chance of matching up with a red hot 76ers side.

The Philadelphia 76ers will aim to take advantage of a struggling Detroit Pistons side with their offensive prowess.

The Pistons simply don’t have enough firepower to match up to the best team in the Eastern Conference.

The Philadelphia 76ers are the favorites to take a win on the road.

Where to watch Philadelphia 76ers vs Detroit Pistons

The local coverage of the Philadelphia 76ers vs Detroit Pistons game will be available on Fox Sports Detroit and NBC Sports Philadelphia. Fans can also live-stream this matchup via the NBA League Pass.