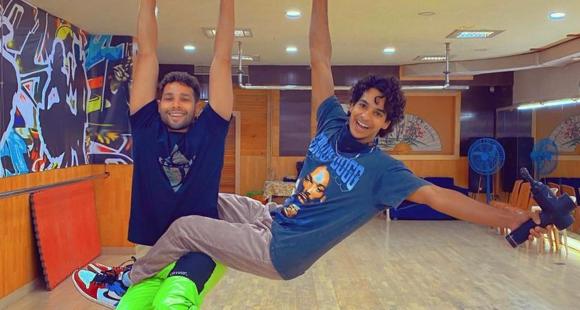 Katrina Kaif, Siddhant Chaturvedi, and Ishaan Khatter will be collaborating for the first time in Phone Bhoot. It has been directed by Gurmeet Singh of Mirzapur fame. Phone Bhoot was among the many movies that were announced last year which left the curious movie buffs excited. What was more interesting is that the first look of the horror-comedy was also unveiled with the announcement and it was nothing less intriguing. In the past few months, the makers and the star cast have been giving updates from time to time regarding the developments revolving around it. Over the past few days, the lead actors have been taking dance classes.

As we speak of this, Siddhant Chaturvedi who is a part of Phone Bhoot has shared a rather goofy picture with his co-star Ishaan Khatter on social media. One can figure out by having a look at the background that both of them were inside their dance class when the picture was taken. Siddhant and Ishaan can be seen hilariously hanging while holding on to each other. In yet another picture, they can be seen shaking a leg with a ‘virtual’ Katrina Kaif.

Earlier last year, there were numerous reports about Katrina, Siddhant, and Ishaan collaborating for a movie and all of them came true with Phone Bhoot’s announcement. The horror-comedy has been co-produced by Farhan Akhtar and Ritesh Sidhwani under the banner of Excel Entertainment. Moreover, Gurmeet Singh of Mirzapur fame is in charge of directing the same. If media reports are to be believed, the movie revolves around catching ghosts. It was only recently that it went on floors much to the excitement of the fans.

Also Read: After Katrina Kaif, Siddhant Chaturvedi kicks off Phone Bhoot’s preparations as he gives a glimpse of script