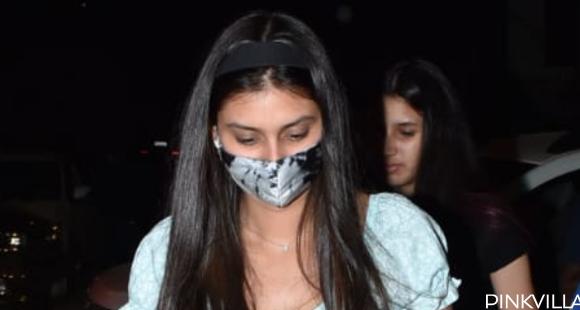 Actor Arjun Rampal is a very doting and protective father. He is often spotted with his daughters in the city. The actor was last in a film Nail Polish which also stars Manav Kaul.

Actor Arjun Rampal, who has been making headlines for his alleged involvement in a drug case, has been garnering a lot of praise for his latest film Nail Polish. The legal thriller which also featured Manav Kaul has received rave reviews from the audience. Apart from being a good actor, Arjun Rampal is also a doting father. He is always spotted with his daughters Myra and Mahikaa in public and also shares their pictures on social media. The trio often gives major father-daughter goals.

Last night Rampal along with his daughters Myra and Mahikaa was spotted in the city. They have stepped out for dinner. The Nail Polish actor kept it simple and stylish. He was seen wearing grey coloured full sleeves t-shirt. Daughters were also seen dressed in simple attire. Mahikaa opted for a light blue coloured dress and Myra went for a black t-shirt and green coloured track pants. As the fans approached for clicking pictures with the actor, both Myra and Mahikaa were seen making way to their car.

However, Arjun Rampal was not seen wearing a mask while his daughters were wearing it. He was walking without a mask towards his car.

Check out their pictures here:

Arjun Rampal made headlines last year after his name surfaced during the probe of the Bollywood drug nexus. NCB officials also conducted a raid at his residence and recovered banned painkillers from his home in Bandra West. He has also appeared before Narcotics Control Bureau (NCB) and also recorded his statement over the issue. His partner Gabriella Demetriades was summoned by them for further interrogation. Rampal’s sister Komal Rampal was also grilled by NCB in a drug case.