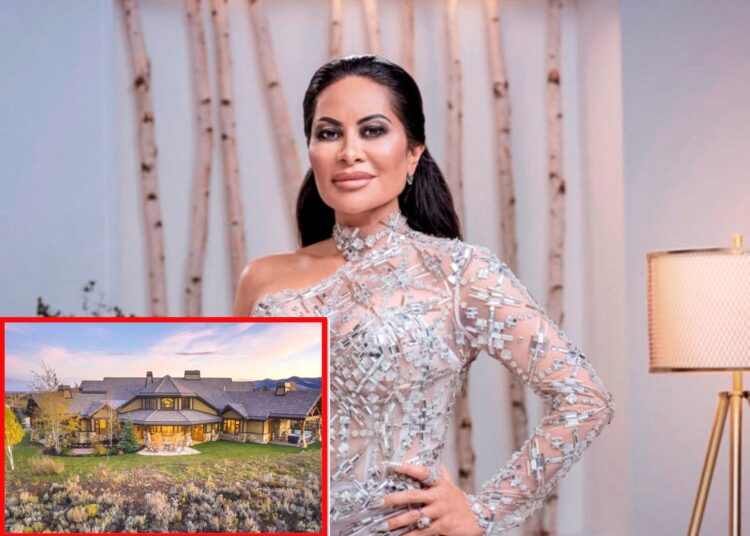 Jen Shah appeared to be the proud owner of her “Shah Ski Chalet” on The Real Housewives of Salt Lake City, but according to a new report, she never owned the $3.9 million property. In fact, when filming began, she was living in a home she later sold for just over $200,000.

On the heels of the uncovering of a past podcast, during which Jen gushed over her loyal assistant, Stuart Smith, who was arrested alongside her on Tuesday on charges of wire fraud and money laundering, it has been revealed that Jen and Sharrieff Shah were actually renting the 9,420-square-foot home fans saw on season one.

As revealed in property records obtained by The New York Post on March 31, the property has been owned by Univesco Inc., a Texas-based real estate company working under the limited liability company RJW Capital Investors, since 2014.

Jen Shah’s rental featured a patio area in the backyard, as well as a hot tub.

Steven Frey of Univesco Inc. told The Post that she was unaware that Jen had been portrayed as the owner of the home on episodes of RHOSLC.

Wooden beams can be seen throughout the home.

While some have assumed that Bravo was unaware that Jen was renting the home, due to the portrayal of the property on the show and articles they have shared, insiders told The Post that the network was well aware that Jen was a renter.

“On the November 11 series premiere … Jen Shah hosted a lavish fete at her house, but even before she transformed the abode (which she calls the ‘Shah Ski Chalet’) for her castmate Meredith Marks’ birthday, our jaws dropped over her insanely gorgeous home,” one of Bravo’s article stated.

A beautiful stone fireplace is seen in the living room.

Early last year, ahead of the premiere of the debut season of RHOSLC, rumors suggested that one of the ladies of the show didn’t actually own the home she filmed in. Then, during a February 2020 episode of Brandi Redmond and Stephanie Hollman‘s Weekly Dose of B.S. podcast, Brandi said she knew someone from the show was renting.

After hearing what Brandi had said, Jen seemingly admitted to renting the home, but she claimed to own several other homes in the area as well as an apartment in New York City.

“Is this what everyone is getting their g-string up their a– about bcuz [they’re] irrelevant? Or is it bcuz they wish they could afford to pay the rent plus own [four] other homes and have an apt in NYC?” Jen wrote in an Instagram comment after a snippet from Brandi’s podcast was shared.

But according to The Post, no documentation was located to back up Jen’s claims of having owned four additional properties or a Big Apple apartment.

Prior to moving into the rental property, Jen and her family had been living in Sandy, Utah, since 2004, when she and Sharrieff bought a home for $302,069.

Years later, as Jen began starring on RHOSLC, she and her husband sold the property at a loss for $213,000 and moved into the $8,500-a-month Park City rental.

As RHOSLC fans have surely heard, Jen and Stuart were taken into custody on Tuesday after being accused of working alongside a number of other co-conspirators on a telemarketing scam that targeted elderly people.

Just months ago, while defending her need for eight assistants on Michelle Collins’ SiriusXM radio show, Jen eerily revealed that Stuart would “literally do anything” for her.

“Some assistants I won’t ask to do certain things, you know? One of them is just, she’s just strictly virtual. So of course I’m not asking her to do… But like Stuart is all in for like crazy stuff,” Jen admitted, via Page Six.

“These people are also doing business things too, but because they’re like helping me with like admin assistant type stuff, that’s why they’re like assistants,” she added.

Jen also praised Stuart on Instagram just weeks ago, telling her fans and followers he was “the real MVP.”

“Some people come into your life for a reason…they are with you through the highs and lows, they are steadfast in their loyalty and love. There’s NO ONE ELSE LIKE YOU! HAPPY BIRTHDAY to my STUCHAINZ! Thank you for being by my side from Day #1. I love you and am so grateful for your friendship, loyalty, sacrifice, support and unconditional love. Have a SHAHMAZING Birthday!”

The Real Housewives of Salt Lake City season two is currently in the midst of production and expected to begin airing on Bravo sometime late this year.

PHOTOS: Jen Shah Was Renting $3.9 Million Home on RHOSLC After Selling Her $213,000 House, Said Assistant Would “Do Anything” for Her