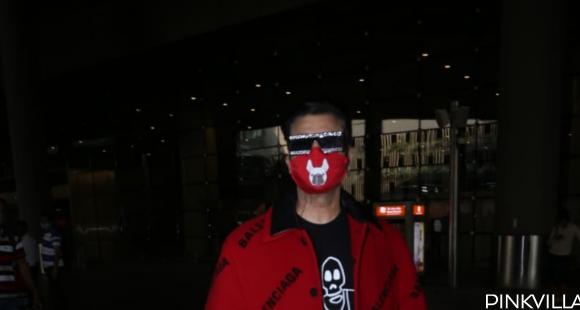 Karan Johar makes a grand entry at the airport in a red blazer and matching mask. The director knows how to make a fashion statement at the point.

PHOTOS: Karan Johar rocks a red blazer at the airport; Matches the ensemble with a red mask

Bollywood”s filmmaker, producer, screenwriter, Karan Johar surely knows how to make head turns. When it comes to fashion, he never fails from making a statement. Apart from his professional work, Karan is known for his sartorial choices. Recently, the filmmaker made a public appearance while attending Varun Dhawan and Natasha Dalal’s wedding at Alibaug. A few days ago, Karan was also spotted with his children Yash and Roohias. And now once again he has created a buzz on the internet as he was spotted at the airport in a red blazer.

Shutterbugs clicked him when the director was making his way to the terminal. Karan Johar was spotted wearing a red coloured blazer with blacktop. And not to miss his red coloured mask matching his ensemble. Karan Johar completed the look with a pair of goggles.  Paparazzi never get enough of him. Whenever KJo steps out of his house, he often gets clicked by the shutterbugs. Though he did not wave at the shutterbugs and just walked out. Earlier in the day, Malaika Arora was also spotted at the airport.

A few days ago, Karan was seen flaunting his most eccentric airport look as he can be seen wearing a black leather jacket paired with black pants.

On the work front, Karan Johar will be producing films like Brahmastra, Jug Jugg Jeeyo, Shershaah, Sooryavanshi, and Shakun Batra’s untitled next. He had announced that he will be going to direct a period drama titled Takht, starring Kareena Kapoor Khan, Ranveer Singh, Alia Bhatt and others.

Also Read: PHOTOS: Karan Johar steps out in his most eccentric airport look, grabs attention in his funky sunglasses

PHOTOS: Karan Johar rocks a red blazer at the airport; Matches the ensemble with a red mask