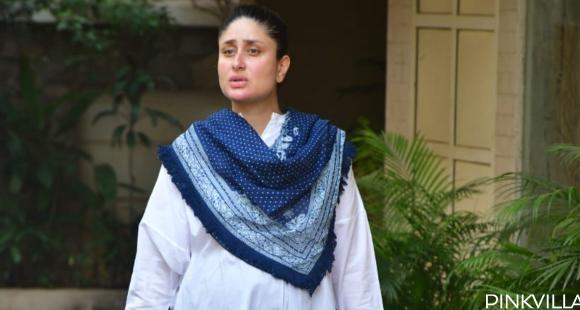 Kareena Kapoor Khan was spotted leaving her home after knowing the demise of her uncle and veteran actor Rajiv Kapoor. He passed away at the age of 58. Rajiv had starred in hit film Ram Teri Ganga Maili.

Veteran Bollywood actor Rajiv Kapoor passed away on Tuesday after suffering a heart attack. He was 58-years-old. The news was first reported by Neetu Kapoor. She took to her social media handle and confirmed the sudden demise. Kareena Kapoor Khan was spotted leaving her residence after hearing the news. Last year, actor Rishi Kapoor had passed away. Many Bollywood celebrities and fans also took to their social media handles to express their condolences for the late actor.

Kareena Kapoor Khan, who is expecting her second child with Saif Ali Khan, was spotted outside her home in Bandra in a simple white kurta and blue scarf. She was seen walking and talking to the paps. The actress didn’t pose for the picture but was clicked while walking. Kareena paired her white kurta with black jeggings and went for black flats. Of late, the 40-year-old star has been shelling out major maternity style goals.

Rajiv Kapoor starred in movies like Ram Teri Ganga Maili, Mera Saathi and Hum To Chale Pardes among others. The actor turned into a film producer in 1991 from the film Henna. Rajiv also produced films Prem Granth and Aa Ab Laut Chalen.

Kareena will next be seen in Laal Singh Chaddha. She has already completed its shoot. The movie also features Aamir Khan with whom she had earlier collaborated for 3 Idiots and Talaash. It is the remake of the Hollywood movie Forrest Gump.