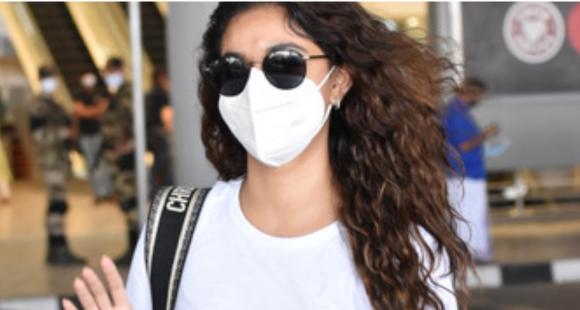 Known for being simple, Keerthy Suresh has time and again proved she is an actor in the industry who has no airs about her.

The National-award winning star Keerthy Suresh was spotted at Hyderabad airport today. The actress was papped in her simple yet pretty airport look. The actress opted for ripped washed-out denim paired with a white top and a statement Gucci belt. The curly hair beauty looked every bit stunning as she waved to the paps before making her way inside the airport. As we all know, the Mahanati actress likes keeping everything simple and casual.

The Rang De actress has time and again proved she is an actor in the industry who has no airs about her. Meanwhile, after holidaying in Spain with her close friends, Keerthy Suresh has resumed work. The gorgeous actress has a lot of films in the kitty including Good Luck Sakhi, Annaatthe, Miss India. Meanwhile, check out her latest airport look and share your thoughts in the comment section below. Coming back to her upcoming films, Keerthy will also be seen playing a lead role in Rajinikanth starrer Annaatthe. The makers had resumed the new schedule of the film in Hyderabad. However, the shooting was put on hold after a few members on the sets tested COVID-19 positive. Meanwhile, she also wrapped up the Dubai schedule of Rang De, co-starring Nithiin.

Keerthy Suresh will also commence shooting for Mahesh Babu starrer Sarkaru Vaari Patta and clearly, she is occupied with a lot of films for the next 2 years.