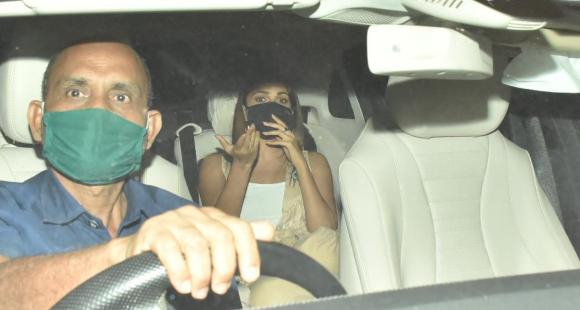 Kiara Advani, who has been rumoured to be dating Sidharth Malhotra, was recently spotted arriving at the actor’s house in Bandra but it was her expressions that have caught everyone’s attention. Check out her pictures below.

Kiara Advani and Sidharth Malhotra often grab headlines for their rumoured relationship. Though the duo has kept a mum on their alleged love affair, the two of them are often spotted spending time together. Both the actors have sparked off their dating rumours at multiple times.  A few days ago, the Kabir Singh star and the Student of the Year actor were snapped together at a family lunch in the city. The actor was joined by his family.

Today, the Laxmii actress was spotted by the paparazzi outside Sidharth’s house. In one of the pictures, we can see her getting out of the car. Other clicks show her sitting inside her swanky white car. In the pictures, Kiara looks bewildered. For the outing, the actress kept it casual yet elegant. Kiara can be seen wearing a white top with fawn-coloured pants and shug. She is also seen wearing a black mask amid the pandemic. With her hair left open, the M.S. Dhoni: The Untold Story had her makeup game on point.

When we talk of Kiara and Sidharth, no one can forget their Maldives vacay. The rumoured couple jetted off to the exotic paradise to ring in the New Year together and the pictures from the same went viral on the internet in no time. Back to Top
Close Add post
X
Marc Daly Ironically Prepping For His Own Reality Show After Announcing Divorce To Kenya Moore…GossipsMarc Daly seems to be the pot calling the kettle black. After announcing his divorce to Kenya Moore, the restauranteur is allegedly prepping for his o…

X
Jordyn Woods Receives Sweet Shout Out From Karl-Anthony Towns As He Reveals He W…GossipsJordyn Woods has been Karl Anthony Towns’ rock for the duration of their relationship. The NBA baller gave his lady a sweet shout out while revealing …
close