Home EntertainmentGossips PHOTOS: Ram Charan and Upasana get papped as they enjoy a long drive with their pet on Valentine’s Day

PHOTOS: Ram Charan and Upasana get papped as they enjoy a long drive with their pet on Valentine’s Day 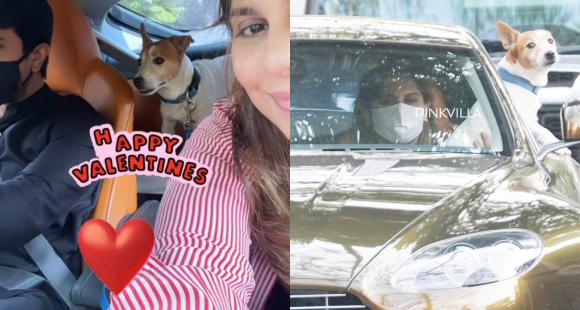 Ram Charan and Upasana have been married for eight years now and are one of the most sought-after couples in the industry.

PHOTOS: Ram Charan and Upasana get papped as they enjoy a long drive with their pet on Valentine’s Day

It”s Valentine’s Day and celebs are seen celebrating the occasion of love in their own way. South star Ram Charan decided to take his wife Upasana on a long drive to celebrate this special occasion. The Tollywood couple was spotted today in Hyderabad as they were enjoying each other’s company along with their pet dog. One can see, Charan is looking dapper as ever in an all-black look while Upasana looks pretty in a white and red top. Sharing a car selfie of herself with Ram Charan and their pet dog, Upsana wrote, “happy valentine’s day.”

The handsome hunk of Telugu film industry and megastar Chiranjeevi’s son, Ram Charan got married to Upasana on June 14, 2012. It was a grand event in Hyderabad but was attended by only close friends and family members. They later hosted a lavish reception on June 15, 2012, which was attended by many biggies and politicians. Ram Charan and Upasana have been married for eight years now and are one of the most sought-after couples in the industry.

Check out their photos below: On the work front, Ram Charan will be seen playing a key role in Chiranjeevi starrer Acharya. The film stars Kajal Aggarwal as the female lead and is backed by Ram Charan and Niranjan Reddy under the Konidela Production Company and Matinee Entertainment banners respectively.

The Rangasthalam star recently teamed up with Kollywood director Shankar for a Pan-India project. The big-budget pan-Indian film will be produced by Dil Raju and is set to go on floors in early 2022. In a statement, Dil Raju said, “I am extremely happy and elated to collaborate with India’s finest actor- Ram Charan and director Shankar Shanmugam. We are bringing this movie to PAN India audience with a vision of creating cinema that will entertain the masses.”