Home EntertainmentGossips PHOTOS: Ranveer Singh exudes charm in his comfy & sporty attire as he goes out and about in the city

PHOTOS: Ranveer Singh exudes charm in his comfy & sporty attire as he goes out and about in the city 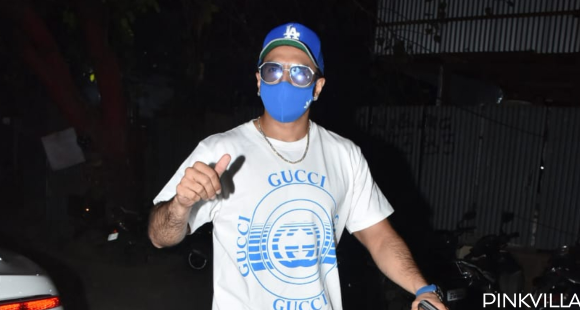 Ranveer Singh, who is known for his unique fashion sense, once again made heads turn with his style statement as he gets papped in the city. Check out his pictures below.

PHOTOS: Ranveer Singh exudes charm in his comfy & sporty attire as he goes out and about in the city

Bollywood’s Bajirao Ranveer Singh is one such star who never fails to turn heads each time he steps out in the city. Apart from his scintillating performances in films, the Padmaavat star is known for making style statements. In fact, he is quite daring when it comes to fashion and has been impressing the fashion police with his unique dressing sense of late. Even in his casuals also, Ranveer manages to make a splash each time he gets out in the public. Today, Ranveer Singh was yet again at his casual best as he goes out and about in the city.

The Gully Boy actor was spotted by the photographers outside a restaurant. For the outing, Ranveer opted for a comfy and sporty look. In the pictures, we can see the actor wearing a white t-shirt with blue jeans with green shoes. Ranveer can also be seen donning a blue hat and funky shades that perfectly go by his look. The Simmba star, who is known for happily greeting paps, was all smiles as he poses for the candid pictures. In the photos, the handsome actor can also be seen giving thumbs up to shutterbugs.

Take a look at Ranveer Singh’s pictures below: On the professional front, Ranveer will next be seen in Kabir Khan’s upcoming sports flick with wife Deepika Padukone. Besides this, he also has Rohit Shetty’s Cirkus in the pipeline and is currently shooting for the same. The film will see the actor playing a double role on the silver screen.

Apart from these, the Befikre star will also be seen in Divyang Thakkar’s directorial Jayeshbhai Jordaar that is bankrolled by Yash Raj Films.