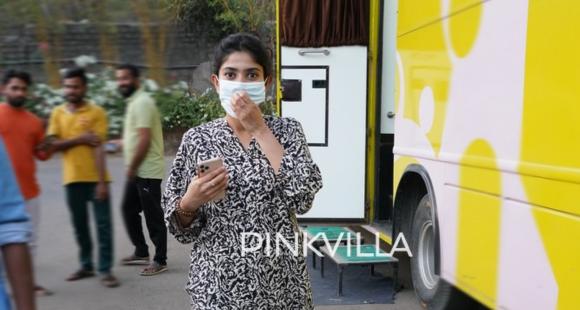 One can see in the photos, the natural beauty is looking pretty as always and all smiles for the paps.

PHOTOS: Sai Pallavi keeps it casual and comfy as she gets papped on the sets in Hyderabad

Known for her simple living and no celebrity tantrums, Sai Pallavi was spotted today on the sets in Hyderabad. The Premam actress kept it cool and comfy in black jeggings that she paired with kurta style long top and black blocked heels. One can see in the photos, the natural beauty is looking pretty as always and all smiles for the paps. The stunner also posed with a fan who insisted for a selfie. With powerful roles in films like Premam, Fidaa, Maari, Kali, and others, Sai Pallavi has created a niche for herself in South cinema.

In 2019, Sai Pallavi had rejected Rs 2 crore offer to feature in a fairness cream commercial. The actress had turned down the offer since she doesn”t believe in promoting fairness products. Reacting to the same, she in an interview with HuffPost India said, “What am I going to do with the money I get from such an ad? I’ll go home and eat three chapatis or rice. I don’t have any other big needs. I see whether I can contribute to the happiness of people around me or I can say that the standards we have are wrong. This is the Indian colour. We can’t go to foreigners and ask them why they’re white, and if they know that they will get cancer because of it. That’s their skin colour and this is ours.” Also Read: Did you know it was K Balachander who changed Shivaji Rao Gaekwad as Rajinikanth? Rest is the history

On the work front, Sai Pallavi will be seen opposite Naga Chaitanya in their upcoming film, Love Story. Directed by Sekhar Kammula, the film has music composed by Pawan Ch while cinematography and editing are performed by Vijay C. Kumar and Marthand K. Venkatesh respectively. Love Story is releasing on, 16 April 2021.

She will also be seen alongside Rana Daggubati in Virata Parvam. Directed by Venu Udugula, the film is produced by D. Suresh Babu and Sudhakar Cherukuri. Virata Parvam is releasing on April 30th.