Home EntertainmentGossips PHOTOS: Salman Khan keeps it simple as he steps out for attending an event

PHOTOS: Salman Khan keeps it simple as he steps out for attending an event 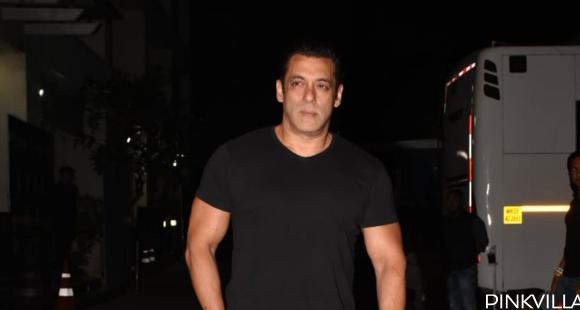 Salman Khan recently wrapped up the shooting schedule of Antim: The Final Truth. Meanwhile, check out his latest pictures.

PHOTOS: Salman Khan keeps it simple as he steps out for attending an event

Salman Khan has been quite busy for the past few days as he had been shooting for his upcoming movie Antim: The Final Truth. Apart from that, he has also been hosting the Weekend Ka Vaar episodes of Bigg Boss 14. With his hands full of important projects and prior work commitments, the actor is seldom seen in the public domain. However, the shutterbugs were finally able to spot him recently in the city and we have got hold of his pictures!

The Radhe actor has been snapped by the paparazzi as he stepped out for attending an event in Mumbai. As usual, Salman kept it simple as he wore a black t-shirt teamed up with a pair of matching grey jeans and black leather shoes. There is denying that the superstar looked dapper even in this casual outfit. He could be seen readily obliging the contingent of camerapersons for pictures. Well, the actor also strikes his signature pose as usual!

Check out his pictures below: As has been mentioned above, Salman Khan is currently gearing up for his upcoming movie Antim: The Final Truth. It also features Aayush Sharma and Pragya Jaiswal in the lead roles. Pinkvilla had earlier exclusively reported that the actor has wrapped up the shooting schedule. He is currently preparing for Pathan in which he will reportedly make a cameo appearance and of course, Tiger 3. Apart from that, the fans are eagerly waiting for the release of Salman’s movie Radhe: Your Most Wanted Bhai.

Also Read: EXCLUSIVE: Salman Khan wraps up Antim in just 60 days; Gears up for Pathan and Tiger 3 next