Home EntertainmentGossips PHOTOS: Sara Ali Khan makes a splash in a traditional outfit as she gets papped in the city 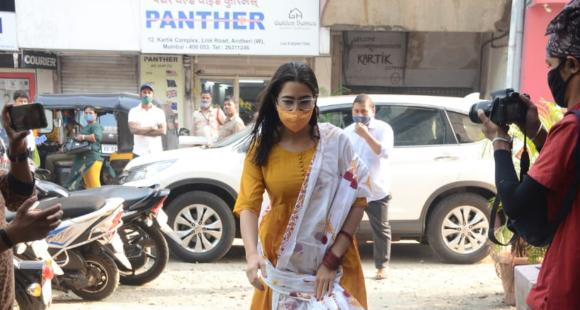 Sara Ali Khan was snapped today by paps in the city and the actress made heads turn with her fabulous sartorial choice. Check out her pictures below.

The gorgeous Sara Ali Khan never fails to disappoint the fashion police, every time, she steps out in the city. The Simmba star often takes the fashion game a notch higher. Be it slaying a chic dress or donning a traditional outfit, Sara manages to turn heads with her impeccable fashion sense. Yesterday, the Love Aaj Kal actress grabbed the limelight as she stepped out in a short red dress to celebrate Valentine”s Day with her close ones.

Today, the stunner went all traditional as she was snapped by the shutterbugs in the city. In the photos, we can see her wearing a yellow kurta with a white palazzo and a matching dupatta and sandals. The pap-friendly celebrity happily posed for the shutterbugs and gave her candid shots to them. The Atrangi Re star can also be seen sporting white glasses. For the outing, Sara opted for subtle makeup and kept her hair open. In the pictures, the stunning actress is also seen donning a yellow mask amid the pandemic. The actress looked elegant in her casual outfit.

Take a look at Sara Ali Khan’s pictures below: On the work front, Sara is gearing up for the release of her upcoming film Atrangi Re alongside Akshay Kumar and Dhanush. The movie has been helmed by Aanand L. Rai. The forthcoming film was scheduled for worldwide release on February 14, 2021, in theatres. However, it got pushed due to post-production delays.

The actress was last seen in Coolie No. 1 with Varun Dhawan and the film received a lukewarm response both from critics and the audience.

Also Read: PHOTOS: Sara Ali Khan rocks a stunning outfit as she poses on her way to celebrate Valentine’s Day