Home EntertainmentGossips PHOTOS: Shaheer Sheikh opts for all black casual outfit as he gets papped in the city

PHOTOS: Shaheer Sheikh opts for all black casual outfit as he gets papped in the city 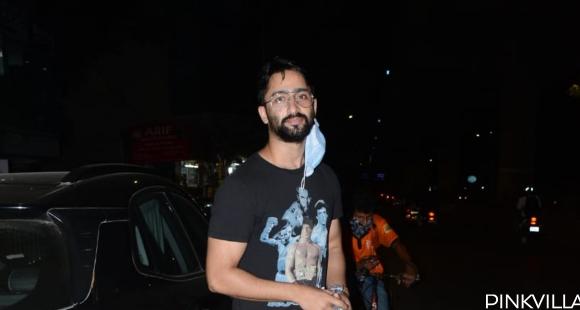 Shaheer Sheikh has been missing from television for a long time. The actor was last seen in Yeh Rishte Hai Pyar Ke.

PHOTOS: Shaheer Sheikh opts for all black casual outfit as he gets papped in the city

Shaheer Sheikh, popular as a handsome hunk of the television industry, has been missing from the small screen. The actor was last seen Yeh Rishte Hai Pyar Ke which went off air. Shaheer Sheikh became more popular from the Kuch Rang Pyar Ke Aise Bhi and his chemistry with Erica Fernandes was loved. There are reports that makers are pondering over to come with the second season of the show. But apart from this Shaheer Sheikh has also made his digital debut with the show Paurashpur.

Today, the actor was spotted in the city in a casual outfit. He kept it very simple in a black tee and grey track pants. Shaheer was also seen wearing a mask and also requested to follow the COVID 19 guidelines. He even posed for the shutterbugs before sitting in his car. Shaheer Sheikh has married to Ruchikaa Kapoor in lockdown last year. The couple is planning for a lavish wedding this year. Soon after the wedding, the couple headed to Jammu to spend some time with each other. Shaheer Sheikh belongs to Jammu. Shaheer has been approached to play the lead role along with Eisha Singh.

Take a look at the pictures here: Also Read: Happy Birthday Shaheer Sheikh: 5 pics with his wife Ruchikaa Kapoor which prove they are made for each other