Home EntertainmentGossips PHOTOS: Varun Dhawan is already a doting husband to Natasha Dalal; Holds onto her as newlyweds leave Alibaug

PHOTOS: Varun Dhawan is already a doting husband to Natasha Dalal; Holds onto her as newlyweds leave Alibaug 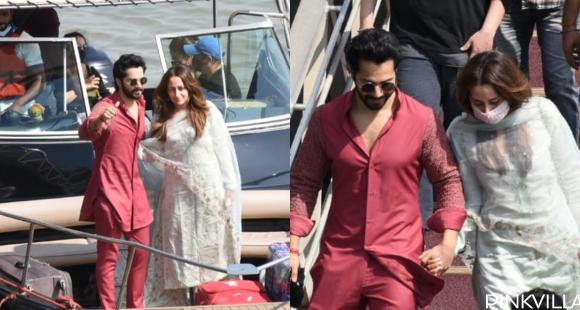 Varun Dhawan and Natasha Dalal were snapped leaving together with friends from Alibaug after their intimate wedding. The Badlapur actor could not let go of his wife Natasha as he posed for photos on the boat with her.

PHOTOS: Varun Dhawan is already a doting husband to Natasha Dalal; Holds onto her as newlyweds leave Alibaug

After getting married in the presence of close family and friends, Varun Dhawan and Natasha Dalal have bid adieu to Alibaug and are on their way to Mumbai for Griha Pravesh of the new bride. The couple was snapped at the jetty as they left Alibaug and the doting husband Varun could not let go of his wife Natasha”s hand. The actor and his new bride stayed back at the Mansion House yesterday after their parents left the private villa after a 3-day wedding extravaganza.

In the photos, we can see Varun clad in a red kurta-pajama while newlywed Natasha can be seen dressed in a gorgeous pastel green suit. She is also seen sporting a mask with Varun. Later, the newlyweds got off the cart and hopped onto the boat where they removed the mask and posed together for the paparazzi. Varun is also seen showing a thumbs up to the paparazzi as he held onto Natasha’s hand while posing. While they were coming down from the stairs, we could see a protective husband, Varun holding onto Natasha and it surely is a sight to behold.

Take a look at Varun and Natasha’s photos: Meanwhile, photos from the sangeet, Haldi, and wedding ceremony have been going viral on social media. Varun had shared the same on his social media handles and left fans in complete awe. The newly married couple also had stepped out to pose for the paparazzi after their wedding on Sunday, January 24th. While reports came in that a reception will be held in Mumbai on February 2, Varun’s uncle, Anil Dhawan spoke to Pinkvilla exclusively and denied any such plans.