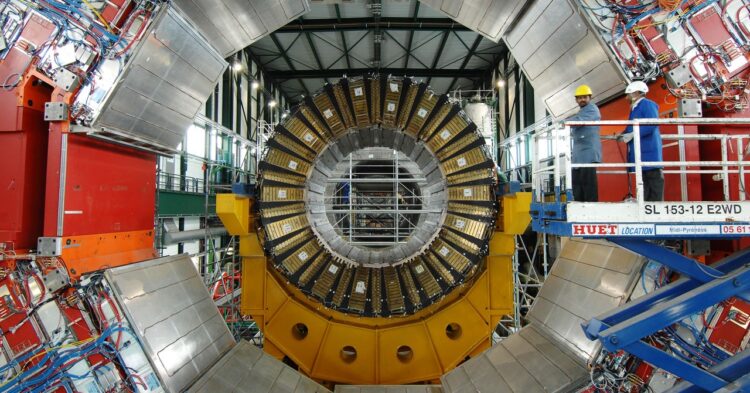 It’s not easy. “Hydrogen is just really hard to laser-cool, because of these bloody ultraviolet lasers,” Hangst says.

The laser has to be precise at a bunch of different jobs. “You have to really precisely control the frequency so we can do the Doppler shift,” says Takamasa Momose, a chemist at the University of British Columbia and one of the laser’s builders. Also, the laser has to put out enough energy in its pulses so the cooling doesn’t take forever.

But it’s not impossible. The team built all that. And when they shot it at antihydrogen, it cooled off just like hydrogen would, already a good sign.

To be clear, it’s not like you can just stick a thermometer into the magnetic trap. You measure this energy differently. Last year, this same team did spectroscopy on their antihydrogen, analyzing it by looking at the spectra of light it emits. Slower-moving atoms emit a narrower spectrum, and when the researchers looked at their post-lasering atoms, that’s exactly what those cold atoms did. They also tested their new results by checking how long it took for their cooled atoms to bounce out of the group and hit the back wall of their container (where, yes, they annihilate). That’s called “time of flight,” and cooler atoms should take longer. They did.

Just as you can’t exactly take their temperature, you can’t point a radar gun at antihydrogen atoms, either. Antihydrogen generally flits around at about 100 meters per second, says Fujiwara, and the ultracool atoms move at just about 10 meters per second. “If you’re fast enough, you could almost catch the atom as it passed by,” he says. (It would annihilate one of your atoms, but you’re tough.)

At this point, it’s reasonable to ask whether this is all worth the trouble. Who needs very slow, very cold antimatter? The answer is, physicists. “Unless something is really screwy, this technique is going to be important, and maybe crucial,” says Clifford Surko, a physicist at UC San Diego who isn’t on the Alpha team. “The way I look at it as an experimentalist is, now you’ve got a whole ’nother bag of tricks, another handle on the antihydrogen atom. That’s really important. It opens up new possibilities.”

Those possibilities involve figuring out whether antimatter really does echo the physics of matter. Take gravity: The equivalence principle in the theory of general relativity says that gravitational interaction should be independent of whether your matter is anti or not. But nobody knows for sure. “We want to know what happens if you have some antihydrogen and you drop it,” Hangst says.

Wouldn’t you? Sure. But this experiment is hard to do, because gravity is actually a wuss. Hot, gassy things don’t fall so much as just bounce around. Antimatter would hit the walls of the machine and annihilate. “Gravity is so bloody weak you may not see anything at all,” Hangst says.

Slow that antihydrogen down to near absolute zero, though, and it starts to act more like a liquid than a gas. Down it blorps, instead of spraying all over. “The first thing you want to know is, does antihydrogen go down? Because there’s a lunatic fringe out there that thinks it goes up—theorists who say there is repulsive gravity between matter and antimatter,” Hangst says. “That would be pretty cool.”

Physicists don’t actually need laser cooling to see if antihydrogen acts like Jules Verne’s cavourite. That’d be … dramatic. “But if you assume now, as most theorists do, that antihydrogen will fall, then you want to ask, does it really fall in the same way?” Hangst asks. Precisely measuring acceleration due to gravity is the short game for the money here, and laser cooling may well make it feasible.