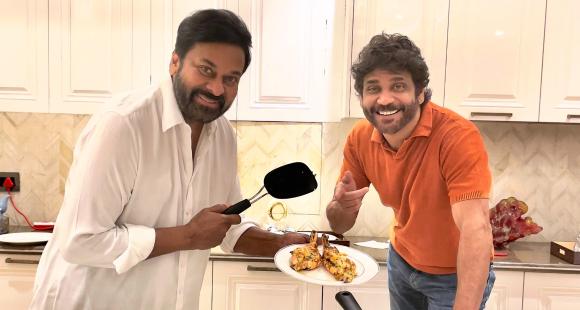 Nagarjuna Akkineni’s Wild Dog has released today on April 2 and ahead of it, the former visited Chiranjeevi’s house.

Megastar Chiranjeevi who has been in the industry for decades now sure knows how to keep calm and deal with nervousness ahead of his any film”s release. Interestingly, Chiranjeevi recently helped Nag also do the same as his film Wild Dog was releasing on April 2. Nagarjuna Akkineni’s Wild Dog has released today and ahead of it, he visited Chiranjeevi’s house. The Sye Raa star cooked a delicious dinner for him and had a gala time together. Nag took to Twitter and shared the same alongside a photo of Chiranjeevi holding a plate of food.

Nagarjuna Akkineni wrote, “A delicious dinner Cooked by the megastar himself to cool my nerves for #WildDog release tomorrow !! Thank you For a wonderful evening picture courtesy Surekha garu.” The photo has been clicked by Chiranjeevi’s wife Surekha. Look at the happy faces and an epic moment that fans always wait for. Legit, ‘Good Friday’! Meanwhile, the makers of Wild Dog has initially planned to release the film on OTT, but went back as Telugu films are doing wonderfully of late.

While speaking at the promotional event of Wild Dog, Nagarjuna had said, “I was surprised when I first heard the title. But, I was convinced with director Ashishor Solomon’s reasoning. Wild Dog in the jungle can hunt anything. They don’t give up. The film will see that kind of a game. Moreover, my character has a nickname of Wild Dog.”

Sham Kaushal who worked for many Bollywood and Hollywood films has choreographed action sequences in the film. Thaman gave background score and he’s a big asset for the film.