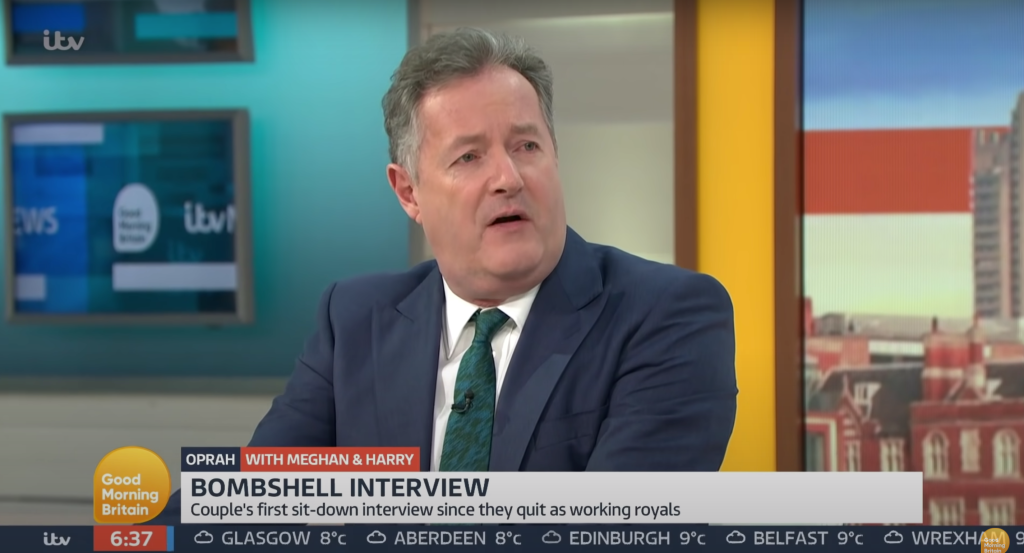 British mental health charity Mind has said it is “disappointed and concerned” after Good Morning Britain anchor Piers Morgan argued he did not believe Meghan Markle when she said she had suicidal thoughts.

On his ITV show this morning, Morgan raged at Markle’s bombshell Oprah Winfrey interview, calling the conversation – which broadcasts in the UK on ITV tonight – “contemptible” and a betrayal of the royal family.

Markle revealed during the interview that the press intrusion on her life during her time in the UK was so acute that she “didn’t want to be alive anymore.” Reacting to her words, Morgan said: “I don’t believe a word she says, Meghan Markle. I wouldn’t believe her if she read me a weather report.”

He was immediately rebuked by his co-presenter Susanna Reid, who said: “That’s a pathetic reaction to someone who has expressed those thoughts.”

‘A lot of people will feel extremely concerned about that.’ @Susannareid100 says Meghan’s revelation that she was on the verge of taking her own life is very concerning.@Piersmorgan says he doesn’t believe Meghan. pic.twitter.com/Hzuc2Z1gUQ

Now Mind has criticized Morgan’s remarks and said that it is talking to ITV about the matter. Mind’s intervention is particularly notable because it is a supporter of ITV’s mental health campaign, Get Britain Talking.

In a Twitter statement, the charity said: “It’s vital that when people reach out for support or share their experiences of ill mental health that they are treated with dignity, respect and empathy.”

ITV is yet to respond to Deadline’s request for comment.

It is the second time in recent weeks that Morgan’s behavior has been called into question. Last month, 1,200 TV freelancers and executives wrote to ITV raising concerns about his treatment of a former Piers Morgan’s Life Stories researcher on Twitter. Morgan said he’d “rather employ a lobotomised Aardvark” than work with Adeel Amini again. ITV said it cannot control the tweets of a freelance presenter.

Pankaj Tripathi opens up about his most prized possessions; READ ON

Siddharth Shukla shares the view of his luxurious flat; dining area and...

Mrunal Thakur: Always encourage girls to be their own superhero