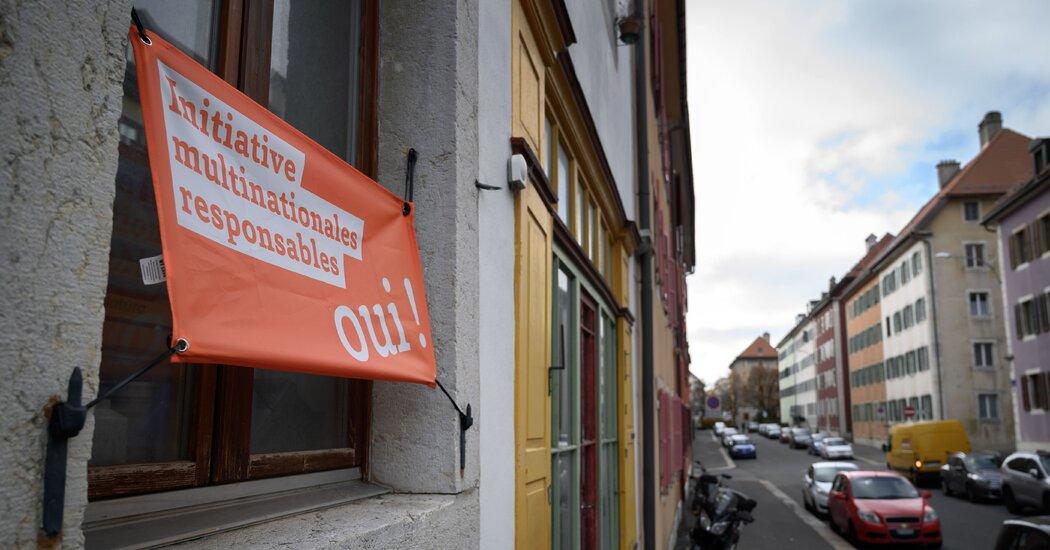 ZURICH — A proposal in Switzerland to make multinational companies headquartered in the country liable for human rights violations and environmental damage committed by their subsidiaries abroad failed in a referendum on Sunday.

The initiative won a narrow majority among voters, with 50.7 percent backing it, but failed because a majority of the country’s cantons, or states, rejected it. Under the Swiss system, because the initiative proposed a constitutional amendment, it needed the backing of both a popular majority and a majority of cantons to pass.

The initiative, promoted by a coalition of over 130 civil society organizations, had faced strong opposition from the business sector and the government, which feared that the rules would hurt Swiss companies amid an economic slowdown linked to the coronavirus pandemic.

With the initiative rejected, milder legislation put forward by the government is expected to come into effect. That legislation also includes due diligence and reporting requirements, but stops short of holding Swiss parent companies liable for rights violations and environmental damage that occur abroad.

The law, which is expected to come into force within the next two years, is weaker than those in some other European nations. Britain and France are among the countries that have passed liability laws linked to corporate social responsibility.

The vote on Sunday had been the source of much debate in Switzerland, and was the most expensive in the country’s history, according to the Swiss newspaper Tages-Anzeiger.

The initiative’s backers had targeted the commodity trading industry as a particular area of concern. The sector has a strong presence in Switzerland, employing 35,000 people.

But as the day of the referendum grew closer, the business sector intensified its opposition to the proposed legislation. A number of executives at multinationals spoke out against it, and companies took out full-page advertisements in Swiss newspapers urging people to reject the proposal.

The reaction from the business sector in Switzerland was largely one of relief. Roberto Colonnello, who led the “no” campaign for the Swiss business federation, Economiesuisse, said that, “Switzerland has spoken out against the overregulation of all our companies.”

He said that the milder government proposal would go far enough and that it included “the most advanced instruments against child labor and the financing of conflict minerals.”

Andreas Missbach, director of Public Eye, one of the organizations behind the initiative, said it was a shame that the tougher proposals did not pass, considering that a majority of Swiss voters were in favor.

He added that the government-backed legislation was insufficient. “The counterproposal doesn’t really bring us anything other than more glossy corporate sustainability reports,” he said. “The problems are still here; they are not going away.”

Separately on Sunday, an initiative on the financing of weapon manufacturers also failed. The proposal would have prevented Swiss institutions, including the central bank, from investing in companies generating more than 5 percent of their revenue from the production of war materials.

RELATED:  Trump's Legacy: He Changed The Presidency, But Will It Last?