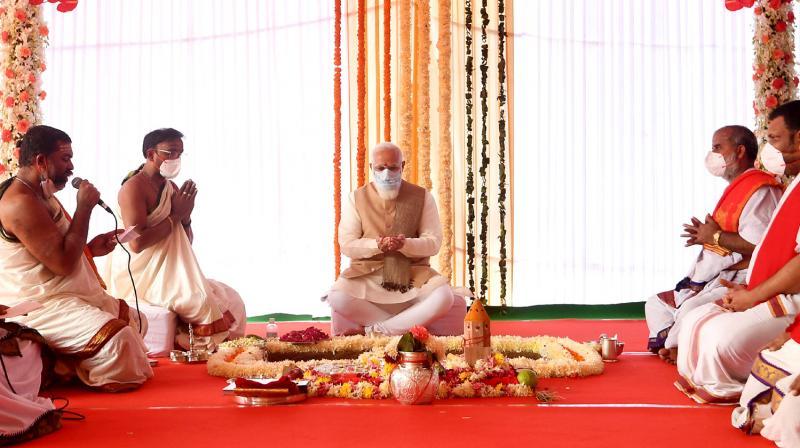 New Delhi: Prime Minister Narendra Modi on Thursday performed the ground-breaking ceremony to mark the symbolic launch of the new Parliament building as part of the “controversial” Central Vista plan. Speaking on the occasion, Mr Modi said that it would be a symbol of a new and self-reliant India as well as a rich testament to the nation’s cultural heritage.

The ceremony was a symbolic one as on December 7, the Supreme Court had come down heavily on the Centre for “aggressively” going ahead with the project, even though a slew of petitions against the project are still being heard by the top court.

It had asked the Centre not to carry out any construction or demolition activity but at the same time allowed it to perform a symbolic ceremony.

The proposed four-storied building to cover an area of around 13 acres is a stone’s throw from the Rashtrapati Bhavan. It is the highlight of the government’s ambitious Rs 20,000-crore Central Vista project. There are plans to finish the building before the country’s 75th Independence Day in 2022, but construction cannot begin yet as a legal challenge to the project is pending in the Supreme Court.

Addressing a gathering after laying the foundation stone and performing the ground-breaking ceremony, Mr Modi urged the people to take a pledge to keep “India First” and asserted that every decision should increase the strength of the country, whose interest is paramount.

Asserting that Indian democratic traditions predate the Magna Carta, a 13th century document many scholars consider as the framework for a modern republic, the Prime Minister said that the day New Parl will be testament to Amtmanirbhar Bharat: Modi  is not far when the world will term India “mother of democracy” if Indians extol the country’s democratic history with confidence.

“It is a very historic day. Today is a milestone in India’s democratic history… We, the people of India, will together build this new building of Parliament,” Mr Modi said, adding that the new building will be an inspiration when India will celebrate 75 years of its independence.

The making of the new Parliament building is an example of co-existence of the new with the old, he said.

“I can never forget the moment in my life when I had the opportunity to come to Parliament House for the first time in 2014 as an MP. Before stepping in, I bowed and saluted this temple of democracy,” Mr Modi said.

“The current Parliament building played an important role in pre and post independent India. The first government of an independent India was formed here and the first sitting of Parliament took place here, our Constitution was drafted here, our democracy was re-established here. Babasaheb Ambedkar and others, after deep deliberations in the Central Hall, gave us a Constitution,” he said.

In his address, Mr Modi also quoted Guru Nanak to underscore the importance of dialogue and noted that the Sikh Guru had said that interaction should continue till eternity.

“Our democracy has moved forward with the goal that there is always room for differences so long as it is not entirely disconnected from the process,” Mr Modi said.

He stressed that policies and politics may vary but all must be for the service of the public and there should be no differences in this ultimate goal.

The Prime Minister asserted that every member who enters the Parliament is accountable to the public as well as the Constitution.

Mr Modi said that there are no rituals as such to consecrate this temple of democracy. It is the representatives of the people who come to this temple that will consecrate it, Mr Modi added.

The new building will seat 888 members in the Lok Sabha Chamber with an option to increase to 1,224 members during joint sessions. The Rajya Sabha chamber will have a seating capacity for 384 members, with an expanded capacity in view of future requirements.