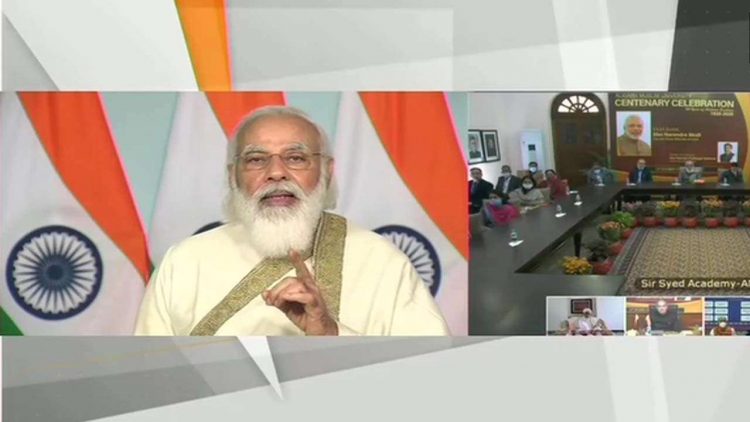 Narendra Modi is the first Prime Minister to address the University. The last time a sitting PM attended an event at the university was in 1964, when Lal Bahadur Shastri delivered the convocation address.

During his speech PM Modi praised AMU saying, the way AMU helped society even during the Covid-19 crisis is unprecedented. PM said that getting thousands of tests for free, building isolation wards, building plasma banks and contributing a large amount to the PM Care Fund shows the seriousness of fulfilling their obligations to society.

Modi said that in the last 100 years, AMU has also worked to strengthen India’s relations with many countries of the world.

Addressing Centenary celebration event of Aligarh Muslim University via video conferencing, PM Modi further stated that, the history of education attached to AMU is India’s valuable heritage. He said that he often met AMU alumni during his foreign visits, who very proudly say that they’ve studied from AMU.

Taking about the achievements of his government Modi said, “The plans that the country is making today are reaching every section without distinction of religion.” Bank accounts of over 40 crore poor people were opened without any discrimination. More than two crore poor were provided pucca houses and more than 8 crore women received gas connections.

School drop out rate among Muslim girls was more than 70% and this situation persisted for 70 years. But after the government started the Swachh Bharat Mission and built toilets in villages and toilets for school-going girls, this rate has fallen to nearly 30%, said PM Modi.