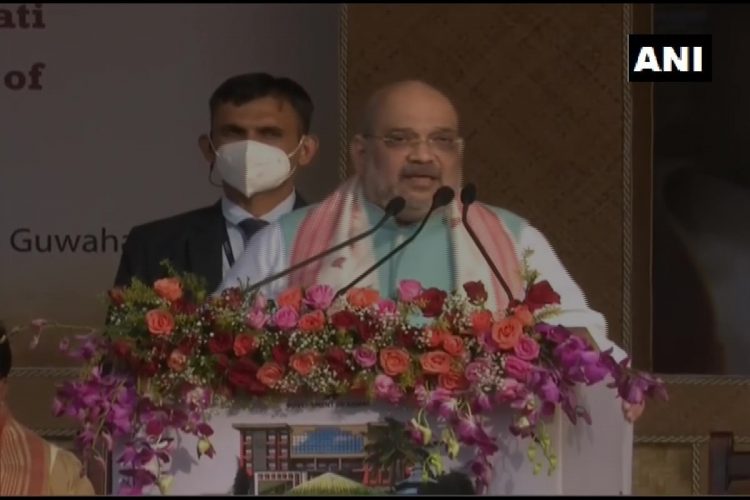 Prime Minister Narendra Modi has the North East in his heart and so brought a flood of development in the region ending era of insurgency, bandhs and road blockades, Union Home Minister Amit Shah said on Sunday. The BJP government under Modi has given a new identity to the region which is now experiencing a new thrust in development, Shah said at the inauguration and foundation laying programme of several projects at Hapta Kangjeibung here.

Earlier, Manipur was known for insurgency, bandhs, and road blockades, but now most militant organisations have joined the mainstream and those left would also do so following efforts of the BJP government, he said. He attacked Congress for failing to solve the problems of Manipur when they were in power and asserted that since last three years under Chief Minister N. Biren Singh the state is moving ahead on the path of growth.

Taking a swipe at the Congress, Shah said the grand old party which ruled the northeastern states for long time only paid lip service to economic prosperity of the area. “During Congress long rule in the region they just laid foundation stones of projects which the BJP government completed in the last six years under Narendra Modi,” the home minister said.

“Earlier Congress government used to give Rs 89,168 crore budget to North East but BJP enhanced it to Rs 3,17,375 crore now”, Shah said. The Inner Line Permit (ILP) has been the biggest gift by the Prime Minister to the people of Manipur which they got even without asking for it, the home minister said.

“Modiji realised that Manipur is not having the Inner Line Permit when other states surrounding it had it which is injustice to the indigenous people and he found a way”, Shah said. It was a matter of “great satisfaction for us when Manipur got it (ILP) on December 11, 2019”, he added.

Inner Line Permit (ILP) is an official travel document issued by the concerned state government to allow travel of an Indian citizen into a protected area for a limited period. It is obligatory for the citizens from outside those states to obtain a permit for entering into the protected state.

Shah said Prime Minister’s attachment to the northeast could be understood from the fact that in the past six years of being in the power, Modi visited the region more than 40 times. “In the past, the northeast used to face flood waters but now people are witnessing flood of development in the region,” he added.

Shah arrived here from Guwahati Sunday afternoon on the last leg of his three-day visit to the North East and laid the foundation of seven projects, including a medical college at Churachandpur, inaugurated the Thoubal Dam and dedicate the Bishnupur-Tupul-Thoubal-Kasom Khullen Road to the public. Lauding the efforts of the BJP-led central government and the Biren Singh ministry in Manipur, Shah said while prior to 2014 only 6 per cent of the households had access to pure drinking water in the state which has increased to 31 per cent in just six years now.

Similarly, there has been 222 per cent increase in the arrival of tourists in the state in last six years, he said, adding a total of 1186 youths of Manipur have launched their start-ups during this time. Union Minister of State for the Ministry of Development of North Eastern Region (DoNER)(Independent charge) Jitendra Singh lauded efforts of Modi government to usher development in the northeastern region.

Chief Minister Biren Singh also spoke on the occasion. BJP came to power in Manipur for the first time in 2017 ending longtime rule of the Congress.