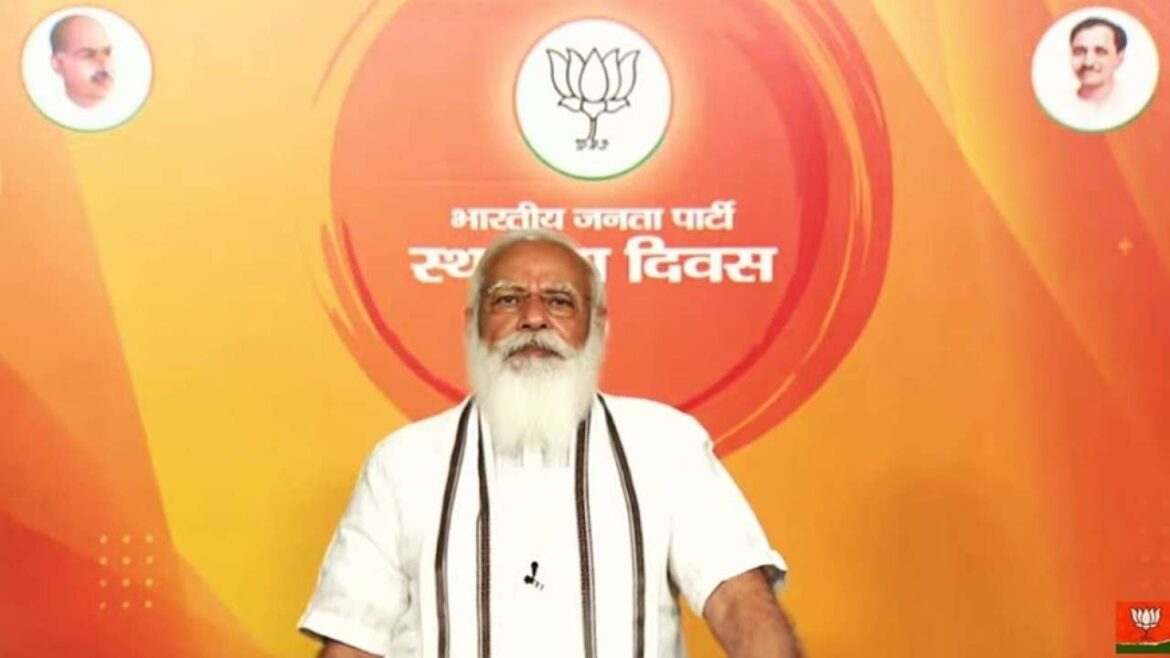 The Bharatiya Janata Party (BJP) is celebrating its 41st Foundation Day. On the occasion, Prime Minister Narendra Modi addressed the party leaders and workers and reiterated the ‘Nation First’ mantra. The PM said that the Bharatiya Janata Party has always worked on the idea of “the party is bigger than the individual and the nation is bigger than the party”.

He also discussed the contribution of senior leaders of the party on this occasion.

Here are the key highlights of the address:

– Our government has fulfilled Syama Prasad Mookerjee’s vision (of one India) by scrapping Article 370 and giving Kashmir the Constitutional right.

– These 41 years are witness to how a party works with service and dedication and where the tenacity and sacrifice of the workers can take any party.

– There are many examples of the breakdown of parties for political selfishness in our country, but there will be hardly any incidents of merger of parties for democracy in the interest of the country. The Bharatiya Jana Sangh had shown that this is possible.

– We have always been blessed with many seniors like our respected Lal Krishna Advani ji, respected Murali Manohar Joshi ji who gave shape and expansion to the party. There will hardly be any state or district in the country, where 2-3 generations have not been spent for the party.

– Last year, coronavirus created a big crisis in front of the whole country. Even then, the BJP workers, forgetting their happiness and sorrow, continued to serve the countrymen. They worked under the resolve of ‘Seva Hi Sangathan’.

– Wrong narratives are created against CAA, farm laws and labour law… it’s a pre-planned conspiracy to create political instability in the country.

PM Modi was virtually addressing the party workers across the country.

The BJP evolved from the Bharatiya Jana Sangh which was founded by Syama Prasad Mookherjee in 1951. Later Jana Sangh was merged with several parties in 1977 to form the Janata Party.

In 1980, the National Executive Council of the Janata Party banned its members from being ‘dual members’ of the party and the RSS. Forcing the former Jana Sangh members to leave the party and float a new political outfit. Consequently, the BJP came into existence on April 6, 1980.