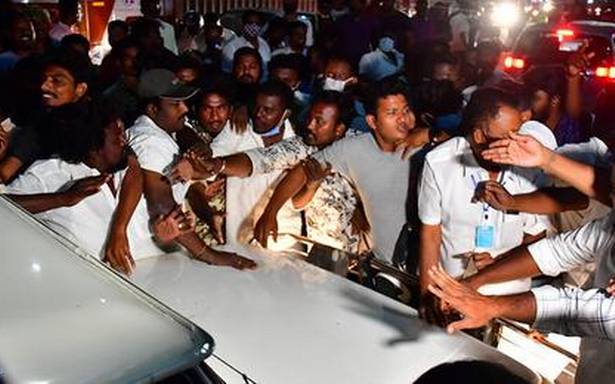 A scuffle occurred between DMK and PMK cadre near Omalur in Salem on Tuesday following an attempt by the latter to show black flags and attack DMK MP Dayanidhi Maran. A few vehicles which were part of the DMK convoy reportedly got damaged.

The attempted attack came a day after Mr. Maran alleged that PMK founder S. Ramadoss and his son Anbumani Ramadoss were known for joining alliances for extraneous reasons. He also accused them of raking up the demand for 20% reservation for Vanniyar community with an eye on Assembly polls. Mr. Maran was in Salem for a two-day campaign programme ‘Vidayalai Nokki Stalinin Kural’. After campaigning at Poosaripatti, Mr. Maran and the DMK leaders were moving towards Kannampadi Malai. PMK cadre were staging protests with black flags condemning Mr. Maran’s remarks.

According to sources, Mr. Maran’s vehicle moved away while PMK cadre tried to stop the vehicle. A scuffle occurred between DMK and PMK cadre following this. The cadre pelted stones and mirrors of passing vehicles got damaged.

DMK cadre gathered in large numbers at the private hotel where Mr. Maran is staying.The police led by Deputy Commissioner (Law and Order) M. Chandrashekaran were involved in bandobust at the Hotel premises.

PMK’s deputy joint secretary Arul on Tuesday said they would conduct black flag protests at all places were Mr. Maran visited and demanded his apology for belittling the protests for reservation and their leaders.