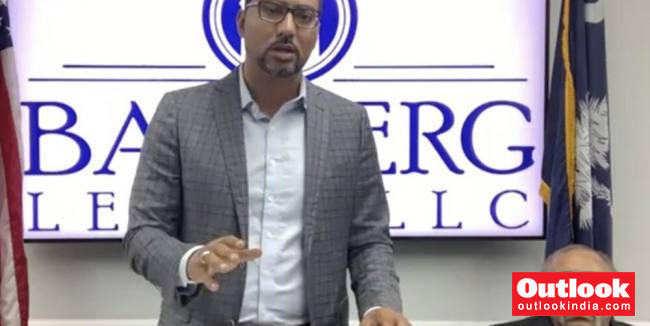 A 71-year-old Black man in South Carolina was embarrassed and feared for his life when a police officer looking for teens who might have been breaking into cars held him outside naked and at gunpoint after he peeked out his door to check on the disturbance, the man said in a lawsuit.

Body camera video of the June 2019 encounter in Rock Hill shows Officer Vincent Mentesana cursing at Jethro DeVane and telling him not to close the door.

Mentesana orders DeVane to stand outside his home naked at 4 a.m., facing the wall, according to the video, which DeVane and his lawyer obtained through a public records request and released Tuesday. When DeVane asks whats going on, Mentesana responds, “I don’t want to talk to you.”

The officer held the gun to DeVanes head for 90 seconds as other officers looked through his home, according to the lawsuit.

“I did what the man said. He had the weapon. He could have took my life in a minute,” DeVane said at a news conference Tuesday with his lawyer.

Once Mentesana got the all-clear, he asked DeVane his name and told him why police were in the neighbourhood.

Police did not have a search warrant for DeVanes house, according to the lawsuit filed Monday, which claims gross negligence, emotional distress and false imprisonment. The suit does not ask for a specific dollar amount.

At the news conference, DeVane said he was embarrassed because there was at least one woman among the officers. He also said he feared for his life; that if he tried to close the door, grab some clothes or argued, the officer with the gun to his head would fire.

“I wont get over it the rest of my life,” DeVane said.

DeVanes attorney, Justin Bamberg, said the way police treated his client reminded him of a police video out of Chicago that surfaced earlier this month. In that video, police are seen breaking down the door of a Black womans apartment as she is changing clothes, and handcuffing her while she is naked.

“Why do we have to be here advocating for human decency and human dignity? It is utterly ridiculous and it is unacceptable,” he said. “And it needs to stop before there is a death. God forbid, if Mr. DeVane had panicked like a lot of people would and tried to close that door.”

DeVanes lawsuit says the Rock Hill police chief found that Mentesana was discourteous, but acted properly, along with the officers who went inside his home and searched it without a warrant.

In a news release shortly after the encounter, police said officers who saw the teens running noticed DeVanes house with tall grass, no lights, an open door and a dirty swimming pool. They thought it might be abandoned and the teens could be inside.

DeVane was detained by officers and police searched his home in the interest of public safety, the news release said.

DeVane said the police chief went to his home later that month to discuss what happened and said he probably shouldnt sleep naked.

“I didnt have my clothes on that night. Why? Im in my house,” DeVane said Tuesday, adding, “Like I told him, if you had let me know you were coming, I would have put my clothes on.”