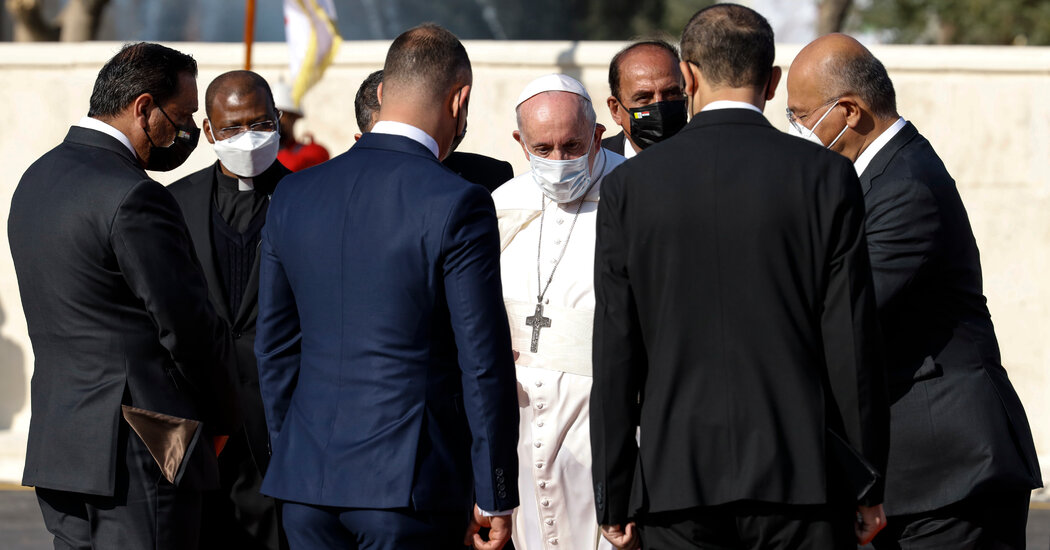 BAGHDAD — Pope Francis made an audacious return to the world stage in the midst of the pandemic on Friday when he became the first leader of the Roman Catholic church to visit Iraq, seeking to help heal a nation uniquely wounded by violent sectarianism, foreign adventurism and the persecution of minority populations, including his own Christian flock.

“I’m happy to travel again,” Francis, who has been vaccinated against the coronavirus, said after taking off his blue surgical mask to address reporters on the papal plane. The 84-year-old pontiff, who suffers from sciatica, was limping noticeably as he walked off the plane and past a line of young people singing in languages including Aramaic, the language of Jesus.

By choosing Iraq and its war-torn — and now Covid-threatened — lands as his first destination, Francis plunged directly into the issues of war and peace, poverty, and religious strife in an ancient and biblical land. His trip is explicitly designed to deepen ties to Shiite Muslims and encourage a decimated Christian population.

But more broadly, it also sent the message that, after a year of being cooped up in Rome and fading from public consciousness, Francis wanted to elevate his profile and spend his time with those who have suffered the most.

“This trip is emblematic,” he said on the plane. “It’s a duty to a land martyred for many years.”

After decades of dictatorship and more than a decade of sanctions, the U.S.-led invasion that toppled Saddam Hussein sparked a security vacuum and the rise of Al Qaeda in Iraq. The country descended into civil war. A decade later, the Islamic State took over a third of the country. Iraq is still struggling to recover.

In Baghdad, the pope traveled through empty, locked-down streets, in a bubble of extraordinary security precautions. Military helicopters hovered overhead. Heavily armed soldiers lined avenues decorated with Vatican flags and “Mesopotamia Greets You” signs. They kept watch from rooftops wherever the pope stopped.

The pope’s visit coincided with a recent return of suicide bombings, increased rocket attacks and renewed geopolitical tensions, and some of Francis’ admirers worry that his whirlwind four-day visit will exacerbate a recent spike in the country’s coronavirus cases by drawing crowds.

But his advisers and Iraq’s top prelates insisted social distancing measures would be followed and argued the trip was necessary to show Francis’ closeness to a flock that had suffered terribly. The pope’s predecessors dreamed of visiting, but those aspirations were dashed by tensions and conflict.

Francis instead seemed determined to go no matter what on a trip that on Friday he called “long-awaited and desired.” To highlight and touch the wounds of his church, Francis went on Friday afternoon to Our Lady of Salvation, a Syriac Catholic church where Islamic militants staged a harrowing attack in 2010, slaughtering 58 people in what was the worst atrocity against Iraqi Christians since the U.S.-led invasion of the country in 2003.

“Four people from ISIS came in here, one from that side, another this way,” said Qais Michael Bernard, 58, who acted as an usher at the church on Friday. After so many Christians had left Baghdad and the country since then, he welcomed the pope’s presence. “It’s good,” he said. “Makes people stay here.”

Light streamed in through the colored stripes of stained glass, falling on the masked priests, nuns and seminarians, distanced three to a pew. As the pope walked in, making the sign of the cross, the church erupted in ululations and traditional music. “The pope has come, the pope has come!” some of them chanted.

Francis limped down the red-carpeted central nave, and took a seat on a wooden throne before the altar. There, as a woman wept quietly in a back pew, he listened to local bishops remind him of the 2010 massacre and the wider persecution of Christians in the country.

But Francis needed no reminding.

“We are gathered in this Cathedral of Our Lady of Salvation, hallowed by the blood of our brothers and sisters who here paid the ultimate price,” Francis said, under a large framed photograph of one of the young priests killed in the attack. He added, “Their deaths are a powerful reminder that inciting war, hateful attitudes, violence or the shedding of blood are incompatible with authentic religious teachings.”

Earlier in the day, speaking at the presidential palace, Francis recalled that “Iraq has suffered the disastrous effects of wars, the scourge of terrorism and sectarian conflicts often grounded in a fundamentalism incapable of accepting the peaceful coexistence of different ethnic and religious groups.”

He added, “How much we have prayed in these years for peace in Iraq!”

On arrival at the palace, Francis stood outside with Iraqi President Barham Salih as a marching band played. He then went inside and acknowledged in a speech that his visit coincided with the world “trying to emerge from the crisis of the Covid-19 pandemic.”

The pope called for an equitable distribution of vaccines to countries already scarred by “fragility and instability.” A vaccination program began just this week in Iraq, where social distancing restrictions are largely ignored.

Francis recalled to Iraq’s leaders the “age-old presence of Christians in this land,” which traces back to nearly the beginning of the faith, and suggested that their protection and engagement in the country’s future were indicators of the health of Iraq’s democracy.

Christianity took root in the region within decades of the death of Jesus. There are more than a dozen Christian sects throughout Iraq.

On Saturday, Francis will achieve an unrealized dream of Pope John Paul II, praying at a major interreligious event in Ur, the ancient city that tradition holds was the birthplace of Abraham, the patriarch of Judaism, Christianity and Islam.

Outreach to Islam is central to Francis’ mission, but so is heartening Christians who have endured so much.

The Rev. Thabet Almako, a priest at the St. Adday church in the town of Karamles, which was overrun by the Islamic State, said he and about 25 members of his church choir would take a bus together to Mosul, where they planned to sing, at a distance, for the pope. About 90 Christians from his town hoped to attend an open-air Mass with about 5,000 faithful in Erbil on Sunday.

“He will push to make progress,” Father Almako said, noting that many of the people in the area, including his own family, had left the country. He said he hoped that the arrival of the pope would reverse that trend and “attract the people back.”

“We hope the reconstruction will be completed in our towns, that the pope’s visit will change the situation all around Iraq,” he said.

In the mid-20th century, Christians made up about ten percent of the Iraqi population.

The American invasion, which the Vatican strongly opposed, proved disastrous for the country’s Christians. (“I come as a penitent,” Francis said Friday. “Asking forgiveness of heaven and my brothers and sisters for so much destruction and cruelty.”)

Iraq’s Christians largely sought safe haven in the Kurdish capitol, Erbil, where they lived for months in tents in church courtyards and makeshift shelters in construction sites. Many have not returned to the communities they fled, in the country’s north amid the flat farmlands of the Nineveh Plans east of Mosul.

The displaced Christians, along with other Iraqis, have had trouble making a living in the country’s devastated economy. In despair over a lack of future for their families, hundreds of thousands have emigrated to the United States, Canada and other Western countries. Thousands more remain in limbo in Turkey and Jordan, waiting to be resettled.

Antonio Spadaro, a Jesuit priest and close ally of Francis who was traveling with the pope, said the visit was clearly one of solidarity with persecuted Christians, but also with the objective to convince the faithful “not to abandon the country.”

Or to disappear, as Christians today constitute little more than one percent of the population.

“Of course this is our fear,” said the Rev. Karam Qasha, a priest in Iraq, who added that just seeing the pope praying with Christians in Iraq would show the Muslim majority “we are here.”