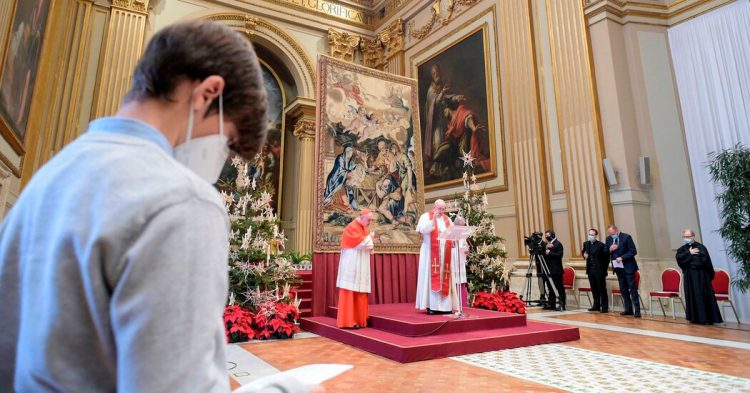 ROME — Pope Francis on Friday called on world leaders, businesses and international organizations to help ensure that the most vulnerable and needy have access to newly developed coronavirus vaccines.

Instead of speaking to the tens of thousands usually gathered on St. Peter’s Square, Francis made his annual Christmas address from a grandiose hall inside the Apostolic Palace of the Vatican.

In a year in which the pandemic plunged the world into economic and social uncertainty, the pope was only one of many Christian leaders and pastors around the globe who issued big, weighty messages to small, in-person audiences.

Francis used his traditional Christmas address to argue that widespread suffering should compel people to reflect on their common humanity, and apply those principles to how vaccine rollouts are handled.

“We cannot allow the various forms of nationalism closed in on themselves to prevent us from living as the truly human family that we are,” the pope said.

“Nor can we allow the virus of radical individualism to get the better of us and make us indifferent to the suffering of other brothers and sisters,” he said. “I cannot place myself ahead of others, letting the law of the marketplace and patents take precedence over the law of love and the health of humanity.”

Nearly a quarter of the world’s population may not have access to a coronavirus vaccine until at least 2022, according a recent study published in the British Medical Journal. The leaders of many poorer countries in Africa, Asia and Latin America have said they are concerned that they will be unable to provide the vaccine for much, if any, of their populations.

Around the world this year, Christians scaled back or reimagined Christmas traditions.

A choral concert was held at Notre-Dame in Paris, where a fire nearly destroyed the cathedral in 2019, but this season the annual French tradition took place without the usual audience.

Midnight Mass at Westminster Cathedral in London is normally a festive affair with pomp and pageantry, but this year’s was scaled back, with the service streamed online instead of attended in person.

“In the darkness of this pandemic, so many of our comfortable assumptions are being shaken,” said Cardinal Nichols, the Archbishop of Westminster. “Here we are, celebrating Christmas, yet deprived of the greetings, hugs, kisses and handshakes that normally fill this day.”

He said that the pandemic had tested family bonds, and lamented that some people in care homes and hospitals who longed to see loved ones would “fade away from sheer loneliness.”

In the Holy Land, the thousands of pilgrims usually flocking to Bethlehem to celebrate were absent. A suspension on international flights and other restrictions meant that few could make it to the Church of the Nativity, which was built on the spot where Christians believe Jesus was born.

Christmas Eve Mass at St. Patrick’s Cathedral in New York City was subdued, with attendance limited to 25 percent of capacity, or 500 people.

At the Vatican, Christmas Eve Mass in St. Peter’s Basilica was moved ahead two hours to comply with the Italian government’s 10 p.m. curfew.

The pope traditionally uses his Christmas Day address to focus attention on the conflicts or natural disasters that have plagued the planet in the past year.

And he did so again on Friday, asking the world to recall the suffering of so many in 2020 — from the Yazidis in Iraq to the Rohingya in Myanmar. He said it was the duty of every citizen of the world to help end violence and ease suffering.

Francis said the world faced a “moment in history, marked by the ecological crisis and grave economic and social imbalances only worsened by the coronavirus pandemic.”

But it was the pandemic that largely shaped the world this year and the pandemic, he said, that would allow humanity to really consider what global cooperation can achieve.

At the end of his address, bells pealed and echoed in an empty St. Peter’s Square.

Elisabetta Povoledo reported from Rome, and Marc Santora from London.