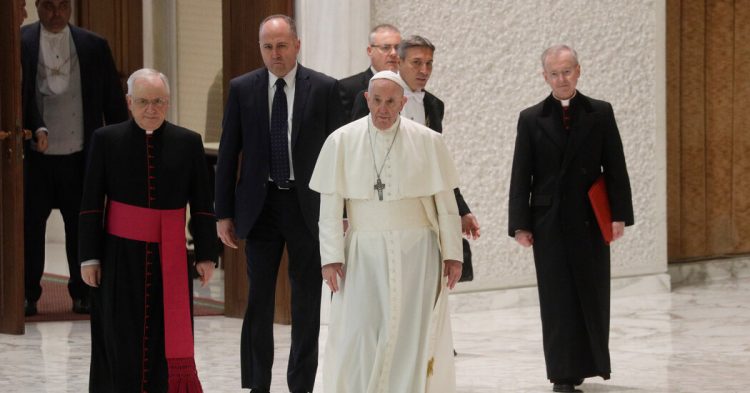 ROME — Pope Francis has stripped the Vatican’s most powerful office of its significant financial assets, the Vatican said Monday, after dubious investments squandered millions of euros in church donations, sparking an embarrassing scandal and prompting an ongoing corruption investigation.

A new law enacted by the pope orders the secretariat of state, the diplomatic and administrative arm of the Holy See, to transfer all its financial holdings and real estate assets to another office, the Administration of the Patrimony of the Apostolic See, which administers the Vatican’s finances, by Feb. 4.

The changes, included in a law made public Monday, follow a Vatican investigation into the mismanagement of funds at the secretariat of state.

One of the most prominent investments made by the secretariat of state involved the purchase of a London property that was bought in part with money donated by the faithful.

In October 2019, Vatican prosecutors ordered a raid on the offices of the Vatican’s banking regulator as part of an investigation into the purchase. The investigation led to the resignation of the Vatican’s chief of security, the removal of several Vatican employees and officials, and the arrest of an Italian banker involved in the transaction.

No one has been charged in the case, however, and the banker has been released.

The changes announced Monday are also in line with Francis’ agenda to reform the Vatican’s administration, a task that has proved to be a considerable challenge in the nearly eight years since Francis became pope, in part because of pushback from Vatican bureaucrats.

A preamble to the law said the decision to revoke the secretariat’s funding was taken to ensure “better organization of the administration, controls and supervision of the economic and financial activities of the Holy See,” more “transparent and efficient management” and a “clear separation of responsibilities and functions.” It noted that other departments already handle financial and economic matters.

The law also calls for the creation of a new fund for donations to the pope that had previously been managed by the secretariat of state, to ensure “greater control and better visibility,” the Vatican’s statement said. The Vatican’s economy ministry will oversee spending.

The Vatican said the change would free up the secretariat of state to assist the pope and his successors “in matters of greater importance for the good of the Church.”

“It’s a step that configures a fairly distinct downsizing of the secretariat of state,” said Sandro Magister, who writes a much read blog on the Vatican. “The pope has outlined the process quite precisely, and in a valid way” with regards to the Vatican’s legal code, he said.

The law formalizes what the pope set in motion last August, in a letter to the secretary of state, Cardinal Pietro Parolin, demanding the transfer of the secretariat’s assets to the Administration of the Patrimony of the Apostolic See. In the letter, Francis referred to the “reputational risks” that the secretary of state had incurred as a result of investing in the London real estate deal as well as a Malta-based investment vehicle.

Last September, Francis abruptly dismissed Cardinal Giovanni Angelo Becciu, the secretariat of state’s former chief of staff, over allegations of corruption in the London real estate deal that Vatican prosecutors say hemorrhaged church money while enriching middlemen. Vatican and Italian judicial authorities are continuing to investigate that deal, as well as other financial transactions. Cardinal Becciu has denied any wrongdoing.

In November, Francis reiterated his demand that the secretariat of state devolve its assets, appointing a commission to carry it out. With the new law that the pope signed over the weekend, Francis gave specific instructions on how that transfer would occur.

Though the scandal appeared to prompt the pope’s decision, Francis has made reforming the Vatican’s administration, and its finances, a centerpiece of his papacy.

Francesco Clementi, a law professor at the University of Perugia who has written a book on the Vatican’s organization and laws, said that “in restructuring the Vatican’s finances, Francis chose criteria that would be understood by the economic and financial community of the world, adopting a strategy of clarity, and transparency.”

Since Francis became pope, he said, “his church has adopted a series of accords and documents to make the Vatican’s economic and fiscal discipline coherent with the rest of the world.”

The new law effectively adopts the recommendations of Cardinal George Pell, Francis’ first economy minister, who repeatedly clashed with officials at the secretariat of state in his attempts to gain greater oversight over all of the Vatican’s finances. In a 2014 essay, Cardinal Pell complained that some Vatican departments had an “almost free hand” with their finances.

The cardinal’s reform efforts were cut short when he was forced to return to Australia in 2017 to face charges of sexual abuse of a minor. He was acquitted earlier this year and came back to Rome in September.

“We are returning to the initial project that Pell was implementing and was strongly, even violently thwarted” by the secretariat and other Vatican departments, Mr. Magister said.

“Pell faced pushback and it must be said the pope went along with these attempts to block him, taking back powers he had first conferred on the cardinal. Now Pell has been vindicated,” he said.