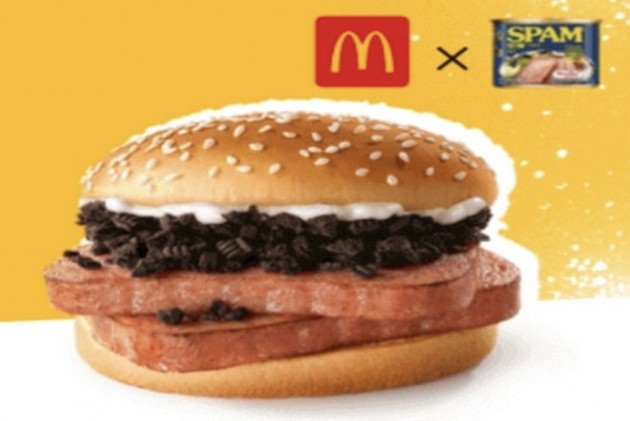 Fast-food chain McDonald’s is selling a sandwich made of Spam topped with crushed Oreo cookies in China in an attention-grabbing move that has raised eyebrows.

Global brands from restaurants to automakers sometimes roll out offbeat products to appeal to Chinese tastes in the populous and intensely competitive market. McDonald’s latest sandwich is undoubtedly one of them.

“I thought it was delicious,” said a comment signed Feifei Mao Enthusiast on the Sina Weibo microblog service. “Is that because I love McDonald’s too deeply? Or is something wrong with my taste?” the user wondered. The sandwich is made of two slices of Spam, a product of Hormell Foods LLC, and Mondelez International’s Oreo cookies, topped with mayonnaise.

McDonald’s Corp. said the sandwich was part of a series of “members only” promotions to be released on Mondays in China.

However, not everyone became an instant fan of the new sandwich.

McDonalds China is introducing a new Oreo x Spam burger on December 21. There will be 400,000 produced and sold.

(Look, I saw this so you have to see it too. Sorry, that’s how it works). pic.twitter.com/QCiog64wAY

“There is no need to release unnecessary products,” said a comment left on the company’s microblog account. It received more than 2,000 “likes.”

McDonald’s said it planned to sell no more than 400,000 of the “Lunchmeat Burgers.” It wasn’t clear how many have been sold or how many people who flooded social media with scathing comments had eaten one.

“When you hate someone but have to invite him to dinner, you can ask him to eat McDonald’s Oreo lunchmeat burger,” one social media user commented.