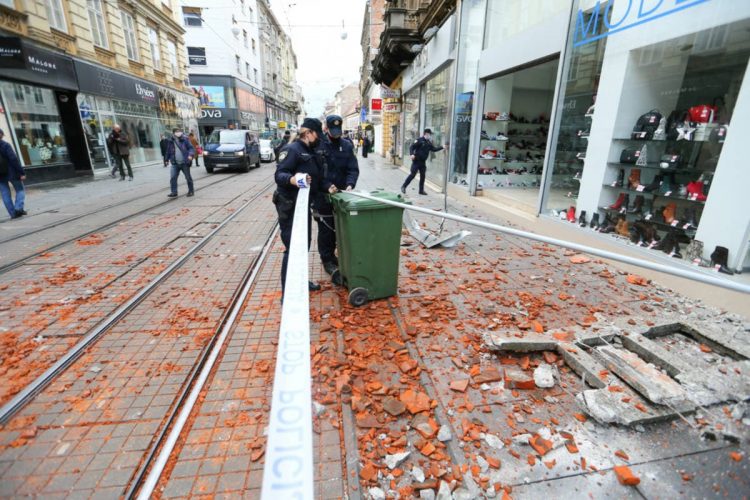 Police officers secure the area after an earthquake, in Zagreb, Croatia on December 29, 2020. (REUTERS/Antonio Bronic)

The tremor, which struck at a depth of 10 kilometres at around 1130 GMT, was also felt strongly some 50 kilometres (30 miles) north of the epicentre in Zagreb, where panicked residents raced onto the streets, according to an AFP reporter.

A powerful 6.4 magnitude earthquake collapsed buildings in central Croatia on Tuesday, striking near the town of Petrinja where rescue teams raced to comb through the rubble. The tremor, which struck at a depth of 10 kilometres at around 1130 GMT according to the US Geological Survey (USGS), was also felt strongly some 50 kilometres (30 miles) north of the epicentre in the capital Zagreb, where panicked residents raced onto the streets

Images of the town, which is home to around 20,000, showed collapsed roofs and streets strewn with bricks and other debris. The same area was struck by a 5.2 quake on Monday. The regional N1 television reported live from the town of Petrinja that a collapsed building had fallen on a car. The footage showed firefighters trying to remove the debris from the car, which was buried underneath. The report said a man apparently was in the car when the quake hit.

“We are pulling people from cars, we don’t know if we have dead or injured,” the mayor of Petrinja Darinko Dumbovic told N1. “There is general panic, people are looking for their loved ones.”

The earthquake was felt throughout the country and in neighboring Slovania, Serbia and Bosnia. The Balkan region lies on major fault lines and is regularly hit by earthquakes. Slovenia’s Krsko nuclear power plant has been shut down as a precaution, the plant’s spokeswoman said. “I can confirm the preventive shutdown,” spokeswoman Ida Novak Jerele told AFP.