Home EntertainmentGossips Pranutan Bahl says she hasn’t spent much time with aunt Kajol: Whenever I’ve met her, she has been warm to me

Pranutan Bahl says she hasn’t spent much time with aunt Kajol: Whenever I’ve met her, she has been warm to me 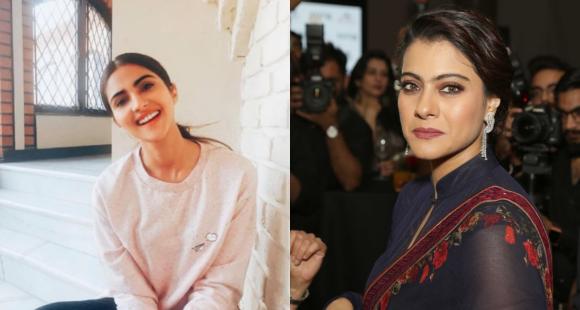 In a recent interview, Pranutan Bahl has opened up about her bond with aunt Kajol and revealed what she loves the most about the actress. Read on further to know what the Notebook star has to say.

Pranutan Bahl says she hasn’t spent much time with aunt Kajol: Whenever I’ve met her, she has been warm to me

Speak of the popular star kids in Bollywood and the list will be incomplete without naming Mohnish Bahl’s daughter and legendary actress Nutan’s granddaughter Pranutan Bahl. The gorgeous actress was launched by superstar Salman Khan in 2019 with his production venture titled Notebook alongside Zaheer Iqbal. Notably, not many know that Pranutan’s grandmother, Nutan, and Kajol”s mother, Tanuja, are sisters. In a recent interview with Times of India, the young actress has opened up about her equation with the Kuch Kuch Hota Hai star and was all praises for her.

Further, she said that she loves the way Kajol conducts herself professionally and that she has a “lot of respect for her.”

Meanwhile, earlier in an interview with Hindustan Times, Mohnish had spilled the beans on his daughter’s acting debut and said despite belonging to a film family, she had to earn her place in Bollywood. The actor also pointed out that Pranutan has got “everything on her own.” He said, “Salman wasn’t even aware that auditions were going on. In fact, he called me when it was final and asked ‘Mohni, are you sure you are good with it? I thought she would be a lawyer or something.”

On the work front, Kajol is garnering much praise for her recently released film Tribhanga: Tedhi Medhi Crazy that marked her digital debut.