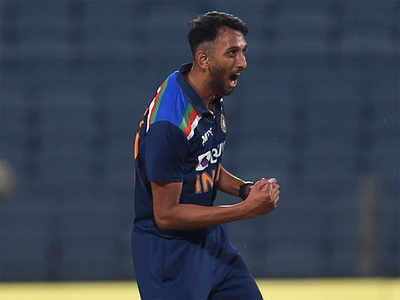 Prasidh Krishna has revealed the role of MotoGP racer Valentino Rossi behind helping him grow a liking towards pace and ultimately becoming a fast bowler.

Since a very young age, Prasidh Krishna has been in love with speed; be it on 22 yards or on a bicycle. Prasidh Krishna, who is a regular member of the Kolkata Knight Riders’ (KKR) squad in the extravagant Indian Premier League (IPL) since 2018, has revealed the role of MotoGP racer Valentino Rossi behind helping him grow a liking towards pace and becoming a fast bowler himself.

The Karnataka bowler, while speaking to the KKR website, stated he loved cycling as a child and a lot of his moves and mannerisms were inspired by the MotoGP great Valentino Rossi.

“I used to cycle a lot because our road was a dead end. So, I used to come down the lane. I used to watch a lot of Valentino Rossi back then, so I had followed him a lot. Maybe that’s where the speed factor came in because I was, you know, seeing him go so fast. It’s so much of speed. So that’s where my liking for speed came into existence,” said Prasidh Krishna.

Valentino Rossi, who currently rides for the Petronas Yamaha SRT team, is one of the greatest motorcycle racers of all time. The Italian has nine Grand Prix World Championships to his name, seven of which are in the premier class. Veteran Valentino Rossi, who is still going strong at 42 and will start the 2021 Qatar GP fourth on the grid, is also the only road racer to have competed in 400 or more Grands Prix.

Prasidh Krishna broke into the international scene with a record-breaking debut in the first ODI against England at MCA Stadium, Pune, March 23. He pocketed 4/54 in his maiden game, recording the best bowling figures by an Indian on ODI debut. He impressed in the second game as well, picking up two wickets for 58 runs in 10 overs. He was the only Indian bowler who went for under six runs per over.

The right-arm pace bowler picked four wickets for 54 runs in the first ODI and two for 58 in the second game that India lost. Known for bowling at a good pace and extracting bounce, Prasidh Krishna has played 24 matches in three IPL seasons and taken 18 wickets.

Prasidh Krishna’s domestic performances have been impressive. He was a driving force behind Karnataka winning the Vijay Hazare Trophy one-day titles in 2017-18 and 2019-20. He was the second-highest wicket-taker (17) in the 2017-18 edition, and also picked 17 scalps in the 2019-20 edition. In the just-concluded Vijay Hazare Trophy, he was among the top five wicket-takers with 14 scalps and helped Karnataka reach the semi-finals where they lost to eventual champions Mumbai.

Prasidh Krishna averages 20.26 with the ball in 9 first-class games while picking 34 scalps. He picked 81 scalps in 48 List A games averaging 23.07 and picked 33 scalps in 40 T20s averaging 35.84 with the ball. Prasidh Krishna and Krunal Pandya were among the surprise inclusions in the ODI squad. Mohammed Siraj and Suryakumar Yadav also found their names in the squad.

India and England lock horns on March 28, Sunday, for the final time on England’s long tour of India. The series is locked at 1-1. India is batting first and is currently 113/1 in 16th overs with Rohit Sharma (37) back in the pavilion. Shikhar Dhawan is batting on unbeaten 64 with skipper Virat Kohli as a company.